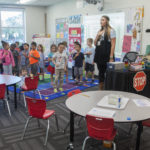 Students recite the Pledge of Allegiance in an updated kindergarten classroom at Hillcrest Elementary School.

Lawrence’s Hillcrest Elementary School has been nominated by the Kansas State Department of Education for the 2018 National Blue Ribbons Schools program, the Lawrence district announced earlier this week.

Hillcrest is one of five Kansas schools nominated for the U.S. Department of Education’s annual honor, which recognizes schools with strong overall academic performance.

Nominees are both public and nonpublic and span from elementary schools to high schools that have “demonstrated consistent excellence or made progress in closing gaps in student achievement,” according to the Lawrence district’s news release.

Hillcrest must complete a rigorous application process through the USDE in order to be considered for a Blue Ribbon national award. Winners will be announced in September, and an awards ceremony will be held later that fall in Washington, D.C., to recognize the Blue Ribbon-winning schools.

Out of Hillcrest’s 300 students, more than 60 percent are English language learners, according to the district’s release. The 65-year-old building boasts an international population of students from approximately 30 countries and is home to one of the Lawrence district’s English as a Second Language (ESL) cluster programs.