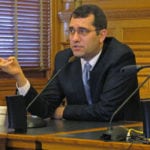 TOPEKA – Kansas Attorney General Derek Schmidt has joined with officials from 15 other states in a brief asking the U.S. Supreme Court to declare that transgender workers are not protected under federal workplace anti-discrimination laws.

The states, led by Nebraska, are asking the court to overturn a decision from the 6th U.S. Circuit Court of Appeals in Michigan, which held that the word “sex,” as used in Title VII of the federal Civil Rights Act of 1964, encompasses gender identity and transgender status.

The case involves a transgender woman named Aimee Stephens, formerly Anthony Stephens, who had worked at a funeral home in Michigan since 2007 as a funeral director and embalmer. In July 2013, according to court documents, she informed the funeral home and her coworkers that she was undergoing a gender transition from male to female and that she intended to dress as a woman at work.

The funeral home had a gender-specific dress code requiring men to wear pant suits with ties and women to wear skirts.

About two weeks later, the funeral home fired her, saying what she was “proposing to do” was unacceptable.

Stephens filed a complaint with the U.S. Equal Employment Opportunity Commission. After an investigation, the EEOC found there was probable cause to believe the funeral home had discriminated against Stephens. It then sued in federal court on her behalf, asking the court for an order to reinstate her in her job with back pay and for a permanent injunction to prevent the funeral home from engaging in gender-based discrimination, “including on the basis of gender identity.”

The funeral home, however, countered that it was entitled to protection under the Religious Freedom Protection Act because requiring it to employ Stephens “would impose a substantial burden on its ability to conduct business in accordance with its sincerely held religious beliefs.”

After lengthy litigation, the federal district court rejected Stephens’ claim, saying “neither transgender status nor gender identity are protected classes under Title VII” and that the company was covered by the Religious Freedom Protection Act.

But in March of this year, the 6th U.S. Circuit Court of Appeals reversed that decision.

Now the funeral home is asking the U.S. Supreme Court to overturn the 6th Circuit.

In an email statement, a spokesperson in Schmidt’s office said Kansas entered the lawsuit in hopes of limiting its potential exposure in future lawsuits against state entities.

“It is within Congress’ authority to expand the scope of these federal laws, but to date Congress has not chosen to do so,” the statement read. “Whether to change these laws is for the people’s elected representatives to decide and not the courts.”

In the brief, filed by 13 state attorneys general and three state governors, all Republicans, the states argue that the 6th Circuit’s ruling oversteps the bounds of federal authority and expands the definition of “sex” beyond anything Congress originally intended.

“The States’ purpose is to note that ‘sex’ under the plain terms of Title VII does not mean anything other than biological sex,” the brief states. “Unless and until Congress affirmatively acts, our Constitution leaves to the States the authority to determine which protections, or not, should flow to individuals based on gender identity.”

Currently there is no state law in Kansas that extends workplace protection to people based on sexual orientation or identity.

In a statement emailed to the Journal World, Thomas Witt, executive director of the LGBT rights advocacy group Equality Kansas, called on Schmidt to withdraw from the case.

“This latest attempt to tear down the wall between church and state – to cite religion as an excuse to legally discriminate against fellow Americans – is just one more dangerous step on the road to divide us, to separate anyone different, and destroy the lives of those with whom they disagree,” Witt said in the statement. “We call on Attorney General Schmidt to withdraw from this lawsuit and instead focus on his job of enforcing the laws of Kansas and providing for the safety and security of all.”