U.S. Senate approves bill that would maintain Amtrak route that runs through Lawrence 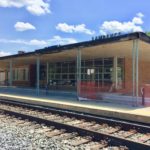 Millions of dollars could be on the way to help maintain the Amtrak train route that serves Lawrence.

Because of maintenance needs, Amtrak is considering changes to the approximately 2,300-mile Southwest Chief passenger route, including discontinuing a portion of the route and replacing it with bus service. A bill passed this week by the U.S. Senate would provide $50 million for track maintenance and other safety improvements for the Southwest Chief, as well as other requirements to ensure the continuity of the route in the near future.

Kansas Sen. Jerry Moran and New Mexico Sen. Tom Udall originally introduced the legislation, an amendment to a transportation funding bill. In a statement, Moran said he applauds the bipartisan efforts to keep the Southwest Chief operational and will continue working with Amtrak to make certain the route remains available for Kansans who need it. Moran noted in particular the importance of the train to rural communities.

“As the divide between urban and rural communities in America continues to expand, passenger rail services like the Southwest Chief are invaluable in connecting Kansans to the rest of the country while also bringing visitors from out of state to our local communities,” Moran said.

A bipartisan group of senators representing states the Southwest Chief travels through co-sponsored the amendment. In addition to $50 million in funding, the Senate agreed to add stipulations that would require Amtrak to match certain government transportation grants and would effectively disallow service disruptions or reductions to the train route in fiscal year 2018. The changes were laid out in an amendment to the 2018 transportation funding bill, which passed the Senate on a 92-6 vote on Wednesday. The U.S. House of Representatives will also need to approve the funding and other changes.

Kansas Sen. Pat Roberts was one of the amendment’s co-sponsors, and said he was pleased at its passage.

“I am pleased the Senate has approved our amendment to ensure continuous rail service on all long distance routes, especially the Southwest Chief,” Sen. Roberts said in a statement. “We heard from many Kansans strongly opposed to the proposed bus service within the route.”

The Southwest Chief route runs between Chicago and Los Angeles and makes two daily stops in Lawrence. Amtrak is considering replacing the portion of the route between Dodge City and Albuquerque with bus service, because of the condition of the track and significant costs necessary to upgrade it, according to a statement previously provided to the Journal-World from Amtrak spokesman Marc Magliari.

The City of Lawrence is opposed to the changes, and previously signed onto a petition and letter to the Kansas congressional delegation that called for the route to be maintained. The city recently began an approximately $2 million restoration of the Santa Fe station that serves the Southwest Chief route, which includes improvements to make the station more accessible for people with disabilities.

The letter, from Mayor Stuart Boley, notes the importance of the route for Lawrence residents and visitors and the city’s ongoing restoration project.

“A primary goal of this project is to improve the train passenger experience and accessibility,” Boley wrote. “It would be a shame if there were reductions to this Amtrak route just at the time when the station restoration is being completed.”

In a statement to the Journal-World on Thursday, Magliari said that Amtrak looks forward to continuing to work with Congress as it finalizes the spending bill in order to ensure Amtrak can best provide a safe, clean and on-time service to its customers.