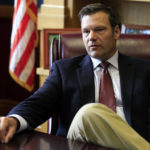 TOPEKA — Kansas Secretary of State Kris Kobach’s work against illegal immigration for small cities across the nation cost them millions for lengthy legal battles while powering his own political rise, according to a news report.

The Kansas City Star and ProPublica account published Wednesday is based on open records requests placed with the towns Kobach represented and comes just days before the Aug. 7 Republican gubernatorial primary in which he is seeking to unseat Gov. Jeff Colyer.

The investigation credited Kobach’s rise to political prominence to the attention his immigration cases across the country generated. Kobach earned more than $800,000 for his immigration work, paid by towns and an advocacy group, over 13 years. At least $150,000 of that was paid while he was working as Kansas secretary of state.

Kobach on Thursday called the report’s conclusions “ridiculous.” He has told The Star and ProPublica that his work for small cities was part of a mission he believed in and it remains a priority.

“I go around the state. I perceive a lot of people want Kansas to stop giving handouts to illegal aliens,” he said. “So that’s something I have expertise in and that is an issue on which I will deliver for the people.”

Kobach has touted his work for Valley Park, Missouri, in crafting and defending the town’s anti-immigration ordinance passed in 2006 that punished employers for hiring illegal immigrants and landlords for renting to them.

After two years of litigation and nearly $300,000 in expenses, the ordinance was largely gutted and now only prohibits employers from “knowingly” hiring illegal immigrants, something already illegal under federal law. The town’s attorney can’t recall a single case brought under the ordinance.

Kobach used his work in Valley Park to attract other clients, with what the investigation found were sometimes disastrous effects on the municipalities.

“It was a sham,” former Farmers Branch Mayor Bob Phelps said of Kobach’s pitch. He “kept telling us, ‘We can win this. We’ll just keep appealing it,’ which I felt was very misleading. It was just a sad situation that we had to go through, and everybody now regrets it.”

Kobach hit back Thursday, saying, “The truth is that every one of the cities already had an ordinance that was passed or voted on, before anyone in the city contacted me for help.”

He also cited an Arizona law he helped draft requiring employers to use e-Verify that was upheld by the U.S. Supreme Court.

And some proponents of the local policies against illegal immigration also lauded his work.

“It was honestly an honor to work with the guy,” said former Valley Park city attorney Eric Martin. “He knew his subject matter and was very driven to get something passed.”

Kobach told the newspaper the cities knew what they were getting into up front.

“The elected representatives of the people made a decision with full awareness that fighting the (American Civil Liberties Union) costs money, that yeah, it was worth it to fight the ACLU and worth it to get these ordinances in place,” Kobach said. “I believe in these cities and these ordinances and what they’re doing. And so if there was some way I could help them, I did.”

The election of Donald Trump gave traction to Kobach’s immigration ideas with him advising the White House on illegal immigration, non-citizen voter registration and the 2020 Census. Kobach chaired Trump’s federal commission on combating voter fraud that was shut down after a bevy of lawsuits challenged it.

In Kansas, Kobach championed a state law that had required proof of citizenship to register to vote. In June, a federal judge struck it down.