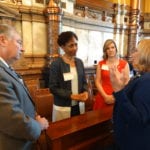 In this file photo from May 31, 2017, University of Kansas Chancellor Bernadette Gray-Little, center, meets with Sens. Jim Denning, left, and Vicki Schmidt, right, before being honored with a resolution by the Kansas Senate at the Statehouse in Topeka. KU's director of state relations, Kelly Reynolds, second from right, was also present for the occasion.

Topeka ? Kansas lawmakers expressed surprise and disappointment Wednesday after learning that former University of Kansas Chancellor Bernadette Gray-Little continues to be paid more than $500,000 this year to serve as a “special advisor” to the university after she stepped down last year.

“What it strikes me as is disappointing,” House Minority Leader Jim Ward, D-Wichita, said after learning of the payment, which is equal to what Gray-Little made during her last year as chancellor. “Tuition rates have been going up in this state, at KU particularly, and this kind of expenditure of money just is disappointing.”

House Majority Leader Don Hineman, R-Dighton, however, said he was not necessarily surprised by the deal.

“Severance packages are common in private industry. I suspect they’re fairly common in academia as well,” he said. “The Regents are the ones who have the decision-making power over that, and if they felt it was appropriate, I’m willing to abide by their decision.”

According to KU officials, the employment agreement was approved last year by the Kansas Board of Regents as Gray-Little was preparing to step down. It calls for her to be paid $510,041 to serve as a “special advisor” during the current fiscal year, mainly to assist in the transition to a new administration. It is not clear what, exactly, Gray-Little is doing in the adviser role. The Journal-World has requested a copy of the employment agreement.

Funding for Gray-Little’s new role is split about evenly between public and private funds, KU said.

Blake Flanders, president and CEO of the Board of Regents, was not immediately available for comment Wednesday.

Many legislative leaders, as well as members of the House and Senate budget committees, were in the Statehouse Wednesday to begin work on crafting final adjustments to state agency budgets for the rest of this fiscal year and the next fiscal year, which begins July 1.

For the Board of Regents, which governs higher education in Kansas, the No. 1 budget priority this year has been full restoration of the cuts that then-Gov. Sam Brownback ordered for colleges and universities in the last fiscal year, or about $24 million.

The Senate Ways and Means Committee is considering a proposal to restore about 75 percent of that, or about $18 million.

But a number of lawmakers said Wednesday that the additional payment to Gray-Little, more than $42,000 a month, undercuts the argument, at least as far as KU is concerned, that universities are being underfunded.

“I would say it certainly doesn’t strengthen that argument very well, now does it?” Rep. Bill Sutton, R-Gardner, a leading conservative on the House Appropriations Committee, said in an interview. “It’s certainly not supporting evidence.”

Rep. Barbara Ballard, D-Lawrence, who is associate director of the Dole Institute of Politics at KU, said she couldn’t predict the political fallout without knowing more details about the arrangement.

“I think people are going to think what they want to think about that,” she said in an interview. “I think maybe the question might be what is she providing to the university?”

“Someone could make that case,” he said. “Someone could also make the case that this is about their prestige within the academic community nationwide and their ability to attract the best talent for a chancellor in the future, that it was important for them to do this. I can see that argument as well. So there are two sides to it.”

Ward, however, said he thinks the severance package could make it harder to get restoration of the cuts through the Legislature this year.

“It certainly does give those folks who aren’t in favor of higher education and tend to fight against it more ammunition,” he said.