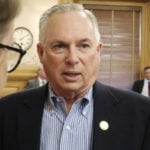 Kansas House Majority Leader Don Hineman, R-Dighton, answers questions from a reporter before a joint meeting of two legislative committees on budget issues, Wednesday, April 25, 2018, at the Statehouse in Topeka, Kan. Lawmakers face a myriad of social and fiscal issues as they try to wrap up their annual session. (AP Photo/John Hanna)

Topeka ? Republican leaders in the Kansas House and Senate expressed sharply different views Wednesday about a tax bill that the Senate passed earlier this month and that the House is expected to take up in the upcoming wrap-up session.

Senate President Susan Wagle, R-Wichita, told reporters that the Senate is “standing firm” on its bill, which is aimed at preventing the state from reaping a windfall as a side effect of recent changes in federal tax law.

But House Majority Leader Don Hineman, R-Dighton, called the bill “flawed” and said at least part of the Senate’s plan may have to be deleted.

“There’s a growing recognition that the Senate bill, as written, is flawed and should probably not be adopted,” he said in a separate interview.

Wagle and Hineman spoke Wednesday as the House and Senate budget committees met to begin work on a final budget bill for the state. The full Legislature reconvenes Thursday for the start of a nine-day wrap-up session.

At issue in the tax debate is a bill the Senate passed late in the night on the final day of the regular session. It is intended to prevent Kansas taxpayers from seeing an increase in their state tax liability as a result of the recently passed federal Tax Cuts and Jobs Act.

Under current Kansas law, however, people who don’t itemize deductions on their federal returns may not itemize on their state returns. The result would be that those people could end up paying more in state taxes.

The Senate’s tax bill, Substitute for House Bill 2228, would change that so people who take the standard deduction on their federal returns could still itemize on their state returns.

But the Senate bill also makes a number of other changes, the full impact of which still have not been calculated.

For one, it increases the amount of money people can deduct for medical expenses, mortgage interest and property taxes paid.

Further, it provides a 25 percent increase in the Kansas standard deduction, something that amounts to an across-the-board tax cut for all people who do not itemize their deductions.

Democrats, and a number of Republicans, have expressed concern about passing a state tax cut so soon after the Legislature reversed course on the Brownback-era tax cuts in 2017, a move they say is now starting to put the state back on stable financial footing.

Wagle, however, said the bill is needed to prevent Kansans from getting hit with a second state tax hike, on top of the one lawmakers approved last year.

“We’re very, very interested in budget stabilization,” she told a group of reporters. “However, if we don’t pass that Senate bill, it’s going to be a double whammy to all the taxpayers. They’ll have, on top of the Kansas income tax increase, another increase because they’re not allowed to itemize. … So the Senate is standing firm on our tax cuts.”

“There’s not as much appetite for that, that I’ve been able to pick up,” he said. “But that’s probably going to be worked out in a conference committee, so I don’t really want to bias those discussions.”