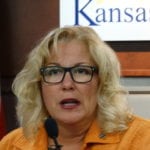 Gina Meier-Hummel, secretary of the Kansas Department for Children and Families, outlines initiatives the agency is taking to improve child welfare services, including the hiring of some 200 unlicensed social workers to fill vacant positions throughout the state.

Topeka ? Kansas child welfare officials plan to ask lawmakers for an additional $24.3 million over a three-year period in order to hire more staff to investigate cases of child abuse and neglect, even if that means hiring people who are not licensed social workers.

Kansas Department for Children and Families Secretary Gina Meier-Hummel made that announcement at a news conference Monday, saying the request is on top of the $16.5 million that Gov. Jeff Colyer requested at the start of the 2018 legislative session.

Lawmakers will consider that request after they return to the Statehouse Thursday for the start of a nine-day wrap-up session.

“We still think that is a critical need,” Meier-Hummel said. “I know that the Legislature has a lot to balance, but we certainly hope that they will give all of those funds that we have requested in order to make the enhancements that we originally asked for.”

Much of the original $16.5 million the administration requested would go toward family preservation services, Meier-Hummel said, with the goal of keeping families together and preventing children from being taken into state custody in the first place.

Most of the additional $24.3 million, she said, would pay for computer system upgrades at the agency.

But it also includes $5.4 million over the three years to hire upward of 200 additional staff who would investigate reports of suspected child abuse and neglect, including people who are not licensed social workers, something that is currently a requirement for that job.

“While we would certainly prefer to have licensed social work staff doing the investigative work, we have been advertising and advertising positions for quite some time now, and we can’t get many of those positions filled,” she said. “I was looking at some of those vacant positions today, and some have been vacant for upward of 500 days.”

Meier-Hummel said about 30 percent of the child protection service positions at DCF are currently vacant, including some that have been vacant for more than a year.

She said the new positions, which will be known as “unlicensed child protection service specialists,” will still require a four-year college degree, and people hired for those positions will work under the direct supervision of licensed social workers.

Meier-Hummel, of Lawrence, was hired Dec. 1 to take over the troubled child welfare agency, which had been the target of harsh criticism from lawmakers and the public because of a number of children who had died while in state custody, children who were forced to sleep in the offices of foster care agencies because there was no space available in a foster home or group home, as well as dozens of children in foster care who had been reported missing.

“I support Secretary Meier-Hummel as she works diligently to improve our child welfare system,” Colyer said in a statement announcing the request. “The changes she is making combined with this additional investment to bolster our child welfare staff will go a long way to help DCF accomplish its mission.”

But the proposal to hire unlicensed social workers met with immediate skepticism from the social work profession.

“Lowering standards and requirements in investigations of neglect and abuse is dangerous and can mean the difference between life and death for children,” Becky Fast, executive director of the Kansas chapter of the National Association of Social Workers, said in an email statement. “A far better safeguard would be to pay well-trained, professional social workers what they’re worth, building a system the public can trust.

“Unless Kansas addresses its issues of low salaries, inadequate training and supervision and high caseloads then the end result will be more children placed in harm’s way,” she added.

On Friday, lawmakers received some good news when state budget officials issued a new revenue forecast showing the state can expect to collect $534 million more in tax revenue through the end of the next fiscal year than had earlier been projected. At the same time, however, lawmakers are under pressure from the Kansas Supreme Court to increase funding for K-12 public schools.

Also Monday, lawmakers received a report showing the cost of mandatory health care and social services through the end of the next fiscal year is expected to be $109 million higher than previous estimates.

A spokeswoman for DCF, however, said that report includes the additional money that the agency plans to ask from lawmakers.