Zenger doesn’t like ‘victim’ description for KU, expresses complete confidence in Self, staff in wake of college basketball scandal 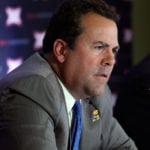 Count KU basketball coach Bill Self and athletic director Sheahon Zenger among those also not thrilled with the description of the University of Kansas as a “victim” in the widening college basketball scandal.

“It is new territory,” Zenger told the Journal-World on Thursday. “I would say both Coach Self and I — there have been comments made in the past week about it — neither of us like the term ‘victim.'”

Federal prosecutors have listed KU — along with Miami, Louisville and North Carolina State — as a victim in the latest indictment that alleges an Adidas executive and consultant orchestrated a pay-for-play scheme in college basketball. KU also highlighted the description of itself as a ‘victim’ as part of its official statement following the indictment. Last week’s indictment alleged that a mother and guardian of two KU players were illegally paid as part of the scheme.

“That’s the term they use in the (indictment), and therefore that is what you use early on,” Zenger said. “But neither one of us like that, but I don’t know what other phrase you use other than the (indictment) says we have been defrauded as an institution.”

Zenger said he thought the most important statement in the indictment as it relates to KU is that the “conspirators sought to conceal this information from the University of Kansas.”

The indictment uses that language regarding the other three schools as well. Unlike Miami, Louisville and North Carolina State, however, the indictment does not mention any KU coaches or officials as having done anything improper. Zenger expressed confidence that would remain the case as the investigation continues.

“We have complete faith in Coach Self and our staff that they go about things in the right way, and we have a very strong compliance unit here,” Zenger said. “They review all of our programs and all of our coaches yearly.”

Zenger said those compliance efforts have been going to “greater lengths” since September, when allegations surrounding pay-for-play at other universities first emerged.

The scandal has left KU with a decision on whether to extend its contract with Adidas. Two of the three defendants in the case — James Gatto and Merl Code — have ties with Adidas. Gatto is an executive of the firm, and Code was a consultant to Adidas during the time of the alleged crimes.

In September, just prior to the news breaking of the first round of indictments in the college basketball case, KU announced a multimillion-dollar, multiyear extension for Adidas to remain as the athletic apparel partner of KU Athletics. However, the deal has not been signed.

On Thursday, Zenger indicated KU was still working to complete the deal, but said KU and Adidas do need to have some additional conversations.

“What I would say is that over the years they have been a very good partner,” Zenger said. “As we move along toward the end of signing this, we need to monitor and make sure we have dotted all the ‘i’s’ and crossed all the ‘t’s.’ And there needs to be multiple conversations between both entities.”