Festivals and street parties coming up in downtown Lawrence 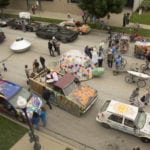 Decorated cars and bikes lined up near the Lawrence Arts Center on Saturday, May 30, 2015, during the annual Art Tougeau Parade in downtown Lawrence.

The onset of warmer weather means outdoor festivities will soon be kicking off, and several events are scheduled for the coming months.

The Lawrence City Commission recently approved temporary alcohol permits for four upcoming events, the first of which is scheduled for next weekend.

The event will feature family-friendly musicians, kids activities and food trucks, according to its Facebook event page. A raffle and silent auction will support Lawrence Community Nursery School. The festival will take place from 3 to 7 p.m. April 28 in Watson Park, 727 Kentucky St.

The street party, hosted by the Lawrence Arts Center, will feature live music, a display of artistically decorated cars, and food trucks, according to the event page. The event will be held from 5 to 9 p.m. May 25 in the 900 block of New Hampshire Street.

The Buskerfest brings local and international street performers to locations throughout downtown Lawrence for the weekend. The city approved temporary alcohol sales on the 900 block of New Hampshire Street and 100 block of East 8th Street during the event. The full schedule for the three-day Buskerfest is available on the event’s website.

The car, truck and motorcycle show will feature live music and food vendors, with all registrant money benefiting Ballard Community Services, according to the Facebook event page. The city approved temporary alcohol sales on Massachusetts Street between 11th Street and South Park Street. The event will take place from 8 a.m. to 3 p.m., Sept. 22, at South Park, 1141 Massachusetts St.