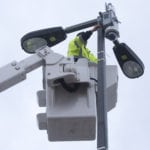 City leaders indicated they are interested in a proposal to add cameras along Massachusetts Street, but asked that a more detailed policy be brought back for further consideration and discussion.

At their work session Tuesday, commissioners indicated they agreed with Police Chief Gregory Burns Jr. that footage from the cameras would help police solve crimes, but they said they were still hesitant about the extent of camera use.

Vice Mayor Lisa Larsen said adding cameras downtown is a big step for the city, and that before moving forward, she would need to see more details than what was given in the current draft policy, such as specific definitions of the circumstances when cameras could be monitored live.

“I walk into this with a lot of hesitation as to the possible unintended consequences that can occur, but I also see the value for helping with solving crime,” Larsen said. “When I read the policy, I just thought it was really light, and I would need a lot more detail in order to move forward.”

Burns is recommending that 19 overt cameras — meaning they are noticeable by passersby — be installed on Massachusetts Street between Sixth and 11th streets. The cameras would not be monitored live by any police personnel with the exception of specific large-scale events, such as the NCAA Tournament and the Lawrence St. Patrick’s Day Parade, or unless other high-pressure circumstances exist, according to the draft policy. The cost to purchase the cameras and computer server costs to manage storage are estimated at $108,000.

Burns, who came to Lawrence from Louisville last year, said that Louisville’s cameras helped police investigate and solve crimes there, and he thinks they would also help Lawrence. Burns said the draft policy is just that, and he expected additions to be made following input from the commission. He said having the cameras downtown is especially important.

“Especially when making downtown a focal point that you want people to come to, I think you have to do things to assure people that we take safety seriously,” Burns said. “And I think this is a step in the right direction to do that.”

Not everyone agreed. During public comment, Kirsten Kuhn spoke to the commission on behalf of the Douglas County Libertarians. Kuhn said her group is opposed to any kind of public cameras, whether they are live-monitored or not. Kuhn said that while she understands the commission and community’s concern for safety in Lawrence, she does not believe cameras are the best use of time and resources.

“There are serious privacy, logistical and financial concerns which must trump a reactionary response to a terrible event,” Kuhn said. “Although we acknowledge a reduced right to privacy in public space, the installation of additional cameras pushes these boundaries without any measurable benefit.”

Larsen asked Burns if there is any data that shows that public cameras deter crime. Burns said he thinks that’s debatable, and that the city would have to see what the effect of cameras looks like at the local level. The police department puts up and live-monitors temporary cameras for certain large events, and Burns gave an example of shifting officers to an area where people were pushing each other during recent NCAA Tournament celebrations.

“Once we shifted the officers, people calmed down,” Burns said. He stressed, however, that using the cameras to get evidence and solve crimes would be the biggest benefit.

Commissioner Matthew Herbert said he wants to be careful that the city doesn’t have a camera program that continues to expand. He said he did not deny concerns that cameras don’t stop crime, but said he saw the benefit of cameras with a reactive policy that allows police to go back and collect evidence.

Commissioner Jennifer Ananda said she is an advocate for privacy, and that public cameras present the difficult issue of trying to balance privacy with security and safety. Ananda said she wanted the policy to address in detail issues such as public accessibility of footage or what kinds of crimes would warrant a police review of footage.

“I would be very closely monitoring what that policy looks like and what the exceptions are to that policy and how we move forward on it,” Ananda said.