With added money approved, Lawrence school board to consider funding priorities for next year 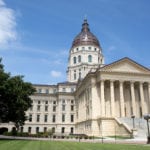 Lawrence schools are expected to see an additional $3.5 million in funding from the Kansas Legislature’s newly passed school finance plan, and district leaders will begin discussing how to spend that money on Monday.

The Kansas State Department of Education estimates that the school funding bill the Legislature approved early Sunday morning would provide the Lawrence school district an added $2.2 million in general fund revenue and an additional $1.3 million in special education funding for the 2018-2019 school year.

Statewide, the bill adds $522 million in new K-12 funding over the next five years. Gov. Jeff Colyer issued a statement Sunday morning indicating that he intended to sign the bill.

On the Lawrence school board’s agenda is a budget update from Kathy Johnson, the district’s executive director of finance. School board President Shannon Kimball said Johnson would share information not only on the school funding plan, but also on the priorities the board could address with the added funding.

Last month, the board allowed staffers to start advertising for three elementary school counselor positions, but told them to defer hiring any until the Legislature made decisions on 2018-2019 school funding. Other hiring priorities discussed last month included an equity facilitator, curriculum facilitators, kindergarten and first-grade teachers and security personnel.

The board will also consider a measure establishing a trust account for donations to help the district with the cost of changing the name of South Middle School to Billy Mills Middle School. The board approved the name change in February, and it will become effective July 1.

The board will first meet for an executive session at 5:30 p.m. Monday at the district offices, 110 McDonald Drive, to discuss security and safety matters. The regular meeting will start at 7 p.m.