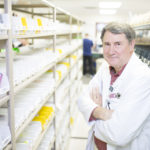 Lawrence Memorial Hospital's director of pharmacy Pat Parker has been honored with the Kansas Hospital Association's Health Care Worker of the Year Award. He is shown Friday, Sept. 22, 2017.

When Pat Parker started working at Lawrence Memorial Hospital, his pharmacy department was in the basement of the facility.

Now, 33 years later, pharmacists have a better view from the second floor as they continue developing clinical services. The hospital has also started putting pharmacists at patients’ bedsides. Much of this progress is due to Parker’s efforts.

Parker, director of pharmacy at LMH, was a recipient of the 2017 Health Care Worker of the Year Award, presented annually by the Kansas Hospital Association.

The award, established in 2013, recognizes individuals who demonstrate leadership, teamwork, dedication and perseverance. A committee of past KHA award recipients selects three winners from a pool of nominees.

“I was totally speechless when the award was presented to me,” Parker said. “People that know me know that I’m not speechless very often.”

Parker has won many awards over the years, such as the 2011 Pharmacists Legacy Award from the Kansas Council of Health Systems. Parker said all the previous awards he had received were given for pharmacy or were given internally from LMH.

“I was very humbled by all of it, honestly,” Parker said.

Parker said he feels grateful receiving awards recognizing his work and effort to teach the next generation of pharmacists. He is also currently an adjunct assistant clinical professor at the University of Kansas School of Pharmacy.

“Pat has been a wonderful teacher for our students,” said Ken Audus, dean of the School of Pharmacy. “He’s one of the best in terms of coming into a classroom and giving students very real-life examples with lots of experience in that area.”

Janine Ohler, an LMH clinical pharmacist and former student of Parker, said she was initially intimidated by Parker in the classroom. She said he’s a smart man who seems to have never forgotten anything he’s ever learned.

“He jokes sometimes that he’s just the director, but there’s nothing ‘just’ about Pat,” Ohler said.

Ohler grew more comfortable with Parker when he was her preceptor at LMH as a post-grad resident — a program Parker helped start in 2009. Parker said LMH was the smallest hospital to have a residency program at the time, which inspired many other hospitals to give the program a try.

“We had several other hospitals decide if Lawrence is going to do it, they can too,” Parker said. “That’s been gratifying to see other hospitals, most bigger than us, finally getting post-grad residency programs.”

Ohler said Parker was instrumental in not only providing residents with a wealth of knowledge and experience, but also with advising residents in creating research projects as part of the program.

“Not every hospital will give you the kind of support Pat gives the residents to do their projects,” Ohler said. “Many projects LMH has continued and are actually making an impact with patients, patient care and generating revenue for the hospital.”

One of the projects, Meds 2 Beds, was created by former resident Abby Hein, who is now the coordinator. The program tasks LMH pharmacists with filling prescriptions for patients prior to their discharge from the hospital and contacting the patient’s primary care physician or regular pharmacist to accurately communicate prescription information.

Parker said many discharged patients were being readmitted to the hospital because they either never picked up their medication or were not receiving the correct information on what medication to take or how to take it.

Parker said the answer was as simple as taking a little bit of extra time and effort. He said he thinks pharmacists should get more engaged in the personalized medicine process, collaborating with physicians to make sure patients get the most benefits out of costly medications.

Parker said the cost of medicine is one of the growing problems in health care, and one he plans to stick around to fix. He said he probably could have retired by now, but he is having too much fun with his staff and his patients.

“There is just too much interesting stuff going on in health care right now,” Parker said. “If you’ve got a high-quality staff, you can really make a great contribution to patient care.”

Even when Parker decides to retire, Audus said, the pharmacy director has already taught the students who will successfully carry his torch.

“I’m looking now at some of them that are pushing to be the next Pat Parker, which has to be very gratifying for him to see that his work goes on through others,” Audus said.