‘What Were You Wearing?’ exhibit at KU takes aim at sexual assault myth 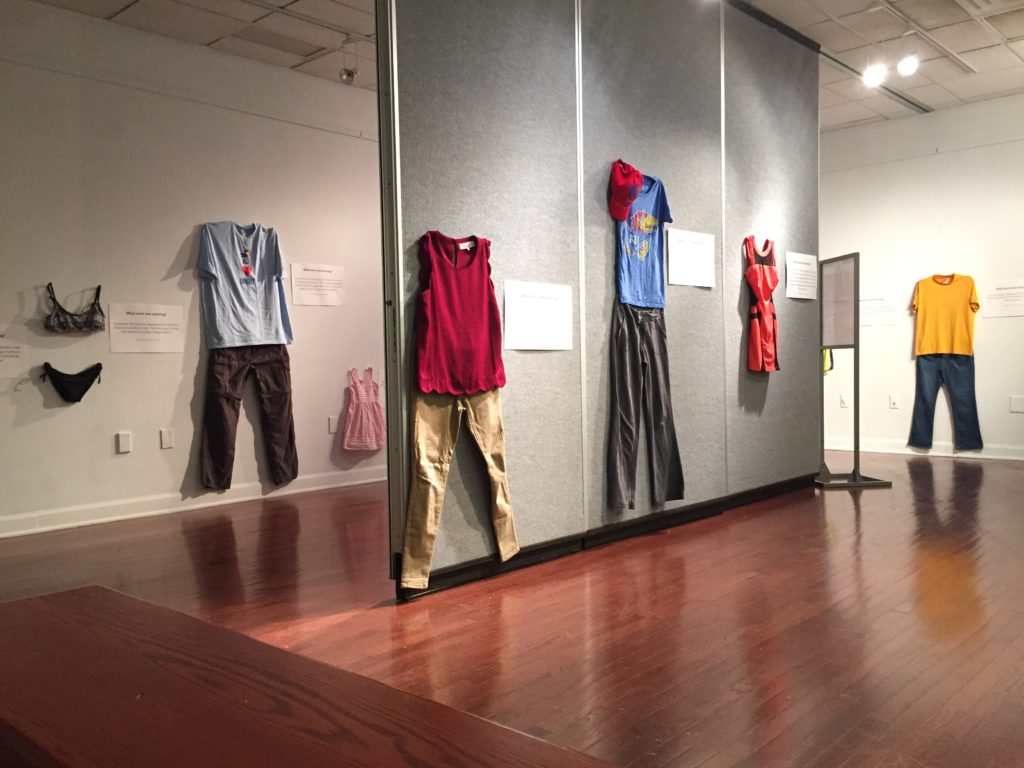 Outfits hang on the walls for the What

There’s also some workout clothes, a button-up shirt with slacks, a nightshirt, a man’s T-shirt and cargo pants, and a couple child-size sundresses.

None of those outfits invited the people wearing them to be sexually assaulted, an installation on view this week at the University of Kansas reminds us.

“What Were You Wearing?” includes a content warning at the door — noting the display includes descriptions of “gender-based violence” and providing a number to call for support — and boxes of tissue throughout. Eighteen outfits hang on the wall, all accompanied by a brief printed story from sexual assault victims answering the question of what they were wearing when they were assaulted.

“We wanted students, or anyone, to walk into the show and to see themselves reflected in the outfits,” said Jen Brockman, Sexual Assault Prevention and Education Center director. “… and put the blame where it belongs, which is on the person who’s caused the harm.”

What: “What Were You Wearing? Survivor Art Installation”

Online: Later this semester, KU’s Sexual Assault Prevention and Care Center hopes to re-create the exhibit and display it in a digital form on the center’s website, sapec.ku.edu. 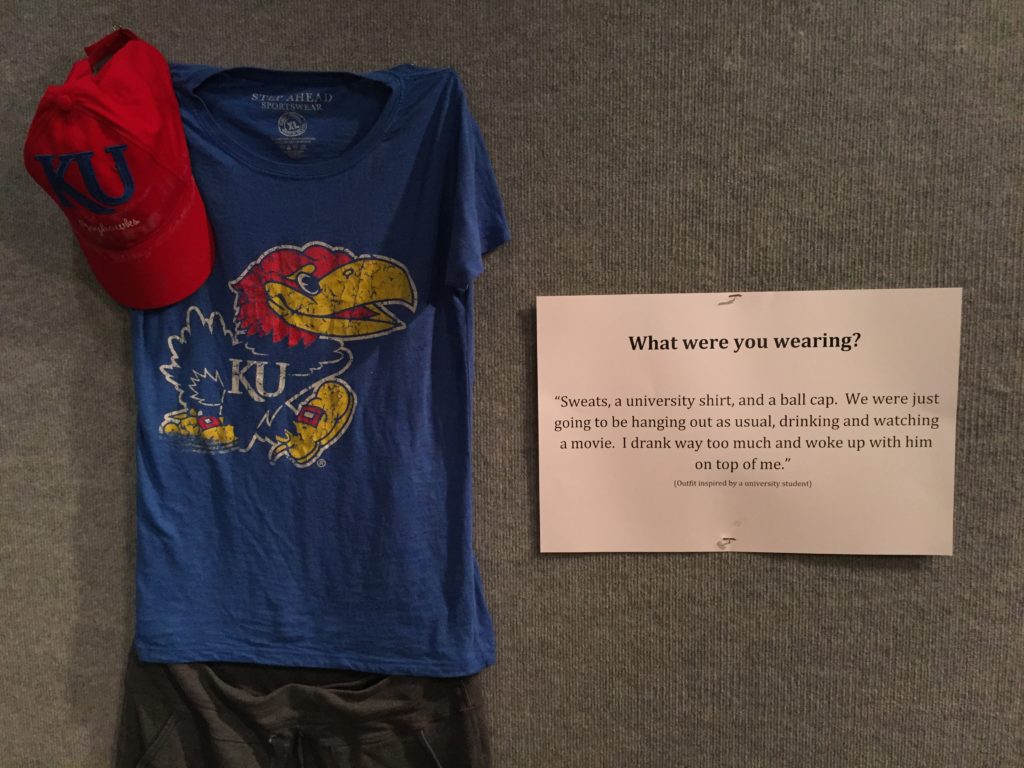 One of the outfits in the What

The description with the red dress reads:

A cute mini-dress. I loved it the moment I saw it. I had some killer heels, too. I just wanted to have a good time that night, look cute, and hang with my sisters. He kept getting me shots, over and over again. The next thing I remember is crawling around on the floor looking for that stupid dress.

The man’s outfit is accompanied by this:

A university T-shirt and cargos. It’s funny; no one has ever asked me that before. They ask me if being raped means I’m gay or if I fought back or how I could let this happen to me; but never about my clothes.

Brockman said the installation originated at the University of Arkansas in 2013 and also has been displayed at campuses in Iowa. Each answer was written by a university student about being sexually assaulted, whether in college or previously in life.

To create the display at KU, Brockman said students here picked the stories on display from about 40 in the collection, then sought donations of clothes to re-create the outfits described.

There’s a spiral notebook in the back corner of the gallery, inviting attendees to share their own answer to be considered for inclusion in future installations.

Brockman emphasized that all stories were shared voluntarily, with permission of the survivors.

The display aims to “confront and disrupt” social norms around rape culture and what causes it, Brockman said.

While social norms may place undue blame on victims for a number of reasons, such as what they were wearing, ultimately perpetrators are the cause of sexual assault, Brockman said.

The timing of the installation is purposeful.

Right now — the first six to eight weeks of classes on a university campus — is commonly known as the “red zone” for sexual assault, Brockman said. It’s the time period when rates of gender-based violence against students are the highest.

As such, the center tries to increase educational programming at the beginning of the school year. Students are coming together and making new connections, yet also may be the most vulnerable because they have a false sense of security, Brockman said.

“Proximity is the greatest predictor of violent crime,” Brockman said.