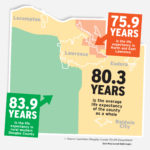 This map, based on information provided by the Lawrence-Douglas County Health Department, shows the variation in life expectancy from the Douglas County average of 80.3 years. Residents of North and East Lawrence have a significantly lower life expectancy than the county’s average, while people who live in the rural western portions of the county tend to live longer.

Between the United States and countries such as Kyrgyzstan, Ukraine and Bangladesh, there exists an eight-year gap in life expectancy, according to the World Health Organization.

This statistic is among many that leaders are highlighting in the 2017 Douglas County Community Health Assessment.

Dan Partridge, director of the Lawrence-Douglas County Health Department, said the sometimes stark differences in life expectancies across the community can be tied to how residents use health care.

Partridge said there is a two to threefold difference in how different Census tracts use health care screening services, use dental screening services, eat healthy food and get exercise, as well as in the prevalence of diseases such as diabetes and chronic obstructive pulmonary disease (COPD).

“You can see in those maps how the behaviors we have, our availability, our use of health care services — all of those determinants of health lead to higher incidences of disease, which leads to a lower life expectancy,” he said.

Partridge said the health department will shine a light on these issues and suggest evidence-based solutions, but ultimately the key to changing the status quo is in the hands of the community.

“We are not powerless,” he said. “In fact, we have a lot of power to change and make this a better place and to make those maps look different in the future. So it’s really just a matter of what we choose to do moving forward.”

Those top nine included five issues that had been identified in the first assessment in 2012: access to health care services; healthy food access and food insecurity; mental health; physical activity; and poverty and good-paying jobs. The four new top issues in this year’s assessment are access to safe and affordable housing; alcohol, tobacco and drugs; child abuse and neglect; and discrimination.

“(Poverty) came out much stronger this time as an issue that people felt was important,” he said.

Asked to name the top three issues in terms of priority or severity for the community, Partridge concurred.

“There are some things, like poverty, that is a root cause of a lot of things in life,” he said. “So if we could wave our magic wand and solve any one problem, which would that be — what would create the greatest good? I think the poverty and good-paying jobs.”

Secondly, he listed housing, which he said might be a topic that many people know is an issue but might not recognize as a health issue specifically.

“We have so many people spending more than half their income on housing,” he said. “… When so much of your resources go into just that basic need of a roof over your head, it doesn’t leave a lot leftover for the other things that are important, like healthy foods, good physical activity, and all the other factors of health.”

The third he named was discrimination.

“While we’re a healthy county (overall), not everyone is healthy, and so much of that poor health has a connection to discrimination,” he said.

Partridge said the health issues survey showed that lower-income groups and underrepresented populations see the community far differently from the way affluent and white respondents see it, and he stressed that “as long as that’s the case, it’s going to be difficult to make true progress.”

The next steps forward will involve the steering committee meeting to work on a plan for the next five years. According to a tentative timeline on the health department’s website, ldchealth.org, the goal is to submit the plan for approval by local governments in January.

The full assessment and its appendices are also available on the website. Partridge said he wants to continue to engage the community in the planning process. For more information or to give input on the plan, email info@ldchealth.org.