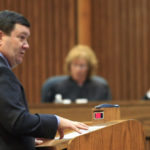 President Donald Trump announced Friday that he has nominated University of Kansas law professor Stephen McAllister to be the top federal prosecutor in the state of Kansas.

McAllister, who teaches constitutional law at the University of Kansas, has for several years served as solicitor general for the Kansas Attorney General’s office, representing the state in appeals before the Kansas Supreme Court.

Reached via email Friday evening, McAllister declined an interview but did send a statement.

“I’m honored to be nominated,” he wrote. “If confirmed by the Senate, it will be a tremendous honor to serve and to work to protect the people of Kansas.”

U.S. Sen. Pat Roberts, the state’s senior senator, applauded the nomination. The nomination will be put before the U.S. Senate for approval.

In a statement released just after 5 p.m. Friday, Roberts said McAllister’s experience in federal and state courts, as well as his administrative experience on the KU faculty, made him a good choice for the position.

“Mr. McAllister is a well-qualified and impressive nominee who has my full support to serve Kansans as U.S. Attorney,” Roberts said in the statement.

“Mr. McAllister is a veteran attorney and has had a distinguished career in federal litigation, as Kansas solicitor general and during his time clerking for two Supreme Court Justices,” Moran said in an email statement. “I look forward to supporting his confirmation.”