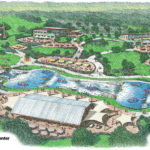 Momentum has slowed on a proposal to construct a multimillion-dollar whitewater outdoor center at Clinton State Park.

State tourism officials said a feasibility study to determine a funding mechanism and plans for the center is ongoing, but not currently the department’s focus.

“I’ve kind of put it on the back burner lately,” said Linda Craghead, assistant secretary of the Kansas Department of Wildlife, Parks and Tourism. “… What we need to do right now is focus on those people who actively utilize our parks and try to encourage additional users.”

The center would include a manmade rafting course and other activities, and plans have called for $70 million of public backing. At this point, financing is yet to be determined, Craghead said.

“Obviously, if we don’t have the funding it won’t happen,” Craghead said.

Originally, the plan was to use Sales Tax Revenue (STAR) bonds as the financing tool. But recent action by the Kansas Legislature has cast doubt on that possibility.

As part of the tax overhaul lawmakers passed this summer, the sunset date for STAR bonds was extended until 2020 but with a one-year moratorium on the approval of new STAR bond districts.

STAR bonds allow Kansas municipalities to issue bonds to finance the development of commercial, entertainment and tourism areas and use the sales tax revenue from the development to pay back the bonds. The City of Lawrence and Douglas County would have to file a joint application for the bonds, a decision that would have to be made by both governing bodies.

Craghead said STAR bonds are just one financing option and “everything is on the table.” She said other options include private funding or partnerships, and that the feasibility study will determine the appropriate funding mechanism as well as what features or activities the center should include.

As is, the main feature of the center would be its manmade whitewater rafting and kayaking course, which would consist of concrete channels with a system for generating rapids. Plans also include an outdoor amphitheater, restaurant, beer garden and conference center. Other proposed activities include zip lines, rock climbing walls, bicycle rentals and an extended trail system through the park.

“For instance, do we incorporate zip lines or do we not; is there whitewater (or) is there not?” Craghead said. “How do we enhance the park to service not only our current constituents but many new constituents?”

Though the department is pushing for the center to be built in the state park, it would not be run by the parks service. Instead, the North Carolina-based U.S. National Whitewater Center would operate the center.

Jeff Wise, president and CEO of the U.S. Whitewater Center in Charlotte, N.C., said from his perspective the center is “absolutely” still in the works, but moving it forward depends on local actions in Topeka and Lawrence.

Wise said that includes getting the public on board with the idea.

The center’s concept and financing plans were introduced in December. After making presentations to the Lawrence City Commission and Douglas County Commission, Wise and Craghead also held community meetings in which many residents were openly critical of the idea.

Wise said he would be there to provide information and help the local dialogue, but that ultimately the center needs the support of local leaders and residents.

“If it’s going to happen then the public support needs to be there,” Wise said. “And we can help provide that, but if it’s not there then we can’t create it artificially.”

Plans for the center have it located in the part of Clinton State Park that is currently campground two. When asked if the department was considering other locations to build the center, Craghead said it has already analyzed all the state parks and that should the project be pursued, it would be at Clinton State Park.

Craghead, noting state parks are still in the midst of camping season, said she’ll be able to focus more of her attention on the whitewater center in the fall.

“Obviously we have to figure out the funding formula for that and how it would work, but we do still hope to move forward in the future,” Craghead said.