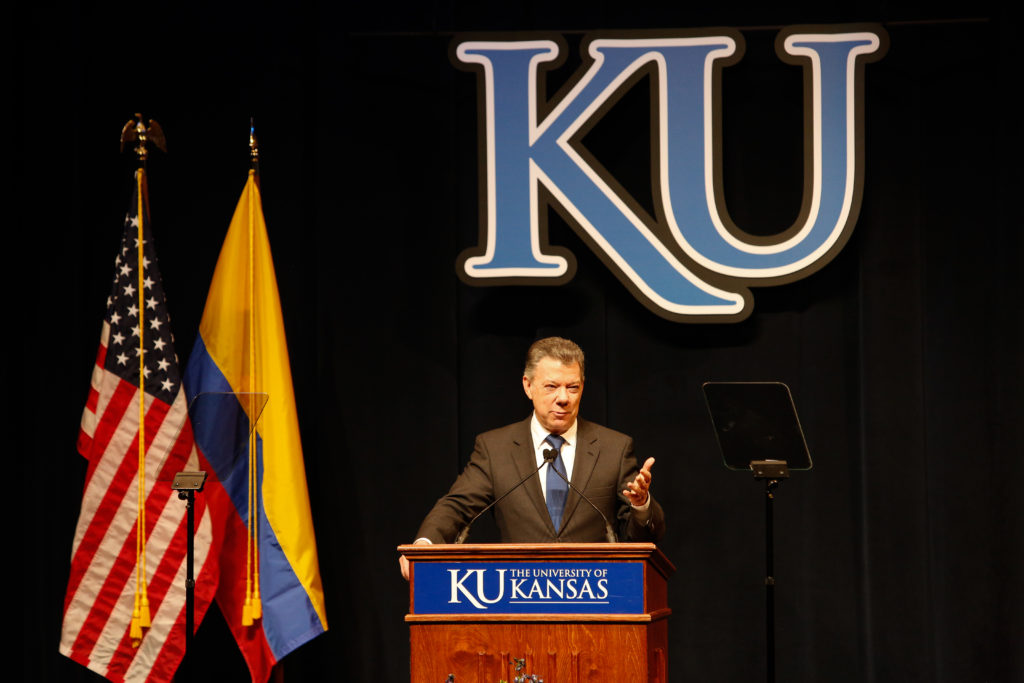 Juan Manuel Santos, the President of Colombia, spoke at the Lied Center on Oct. 31, 2017. Santos graduated from the University of Kansas in 1973.

The last time Juan Manuel Santos visited Lawrence, in 2012, the Colombian president and University of Kansas alumnus said he hoped to discuss a peace settlement in his country by his next stopover at KU.

Santos saw that hope fulfilled Tuesday night at the Lied Center, where he spoke to a crowd of around 400 about his efforts to end a decades-long Colombian civil war that took the lives of more than 200,000 people. Those efforts earned Santos the 2016 Nobel Peace Prize.

“Nobody would have imagined 44 years ago that I would be coming back to Lawrence to talk about my role in ending a war of more than 50 years,” Santos told the audience Tuesday.

Born in Bogota, Colombia, to the wealthy and influential Santos family, the self-described “idealist” arrived at KU in 1969 with a “suitcase full of dreams,” he said. Santos graduated in 1973 with degrees in business and economics before studying at the London School of Economics and Harvard University. 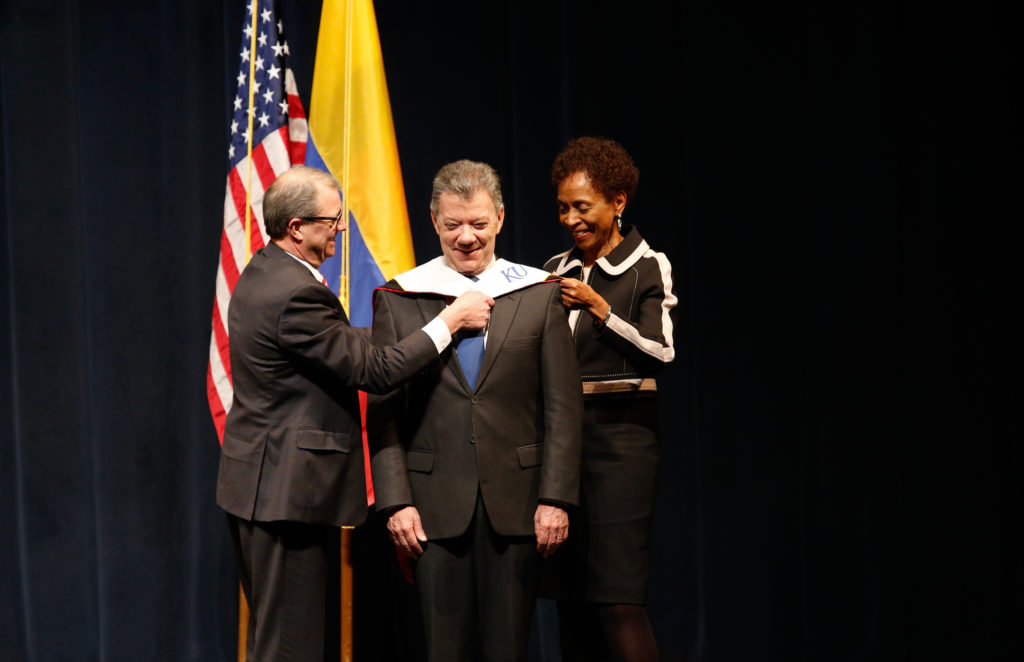 Chancellor Douglas Girod and former chancellor Bernadette Gray-Little perform the hooding ceremony on Colombian President Juan Manuel Santos at the Lied Center on Tuesday, Oct. 31, 2017. Santos graduated from the University of Kansas in 1973, and on Tuesday was presented an honorary Doctor of Humane Letters degree for outstanding contributions to achieving peace in his country and the world.

At KU, he was a member of the Delta Upsilon fraternity. It was there, Santos said, that he learned to play “real poker,” a game he still enjoys from time to time in the tradition of both Roosevelts and Harry Truman, who reportedly hosted poker games in the White House.

He also learned to appreciate the “rich diversity” of humanity at KU, and how differences between cultures should be understood and celebrated.

“And I learned something even more important,” Santos said. “That we can all rise above those differences and work together for the cause that truly matters in this life — peace, liberty, justice, the upholding of basic rights.”

Elected president in 2010, Santos began peace talks with the Revolutionary Armed Forces of Colombia, or FARC, just weeks after his 2012 KU visit. The guerilla group had been warring with the Colombian government since 1964, and Santos’ goal of brokering peace went “against all odds and against the advice of many,” he said.

Today, FARC, the oldest and largest guerilla group in the entire western hemisphere, has ceded its weapons to the United Nations. It has transformed from a collective of combatants into a legitimate political movement, “exchanging bullets for votes,” Santos said.

But, not unlike the tumultuous period of the late 1960s and early 1970s during which Santos came of age, today’s college students are slated to inherit a world that is a “powder keg” once again. Nixon and the paranoia of the Cold War may be long gone, but “now the specter of nuclear devastation looms over the Korean peninsula,” Santos said.

In his remarks Tuesday, the Colombian president delivered what he called “an ode to the center.” Nationalism, racism and populism, among other ideologies, are often presented these days as “easy solutions to our problems,” Santos said.

“But those so-called solutions are the true problem,” he said, and will never bring lasting, positive change.

After his speech, Santos was joined onstage by Chancellor Douglas Girod and former Chancellor Bernadette Gray-Little, who awarded the Colombian president an honorary Doctor of Humane Letters degree. The honor recognizes Santos for outstanding contributions to achieving peace in his country and the world.

Santos said he was “humbled and deeply moved” to receive the honorary degree.