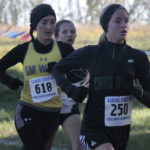 Free State sophomore Emily Stone battles for position during the first mile of the Class 6A girls race of the state cross country meet on Saturday at Rim Rock Farm.

For the first time in a few seasons, Free State High’s girls cross country runners didn’t enter the Class 6A state meet with much chance at winning a state title.

With a little less pressure Saturday, many of the Firebirds responded with the best races of their careers, leading the team to seventh place in the team standings at Rim Rock Farm.

Free State junior Julia Larkin medaled for the third straight season, taking 14th place in 19:24.21. It was her best time since the end of last season, which came on a mostly flat course in South Dakota compared to all of the hills at Rim Rock.

“My goal was to stick with the front pack and I did it,” said Larkin, who beat her previous personal-record by four seconds.

When Larkin entered the final stretch, she saw the time on the clock ahead of her and thought, “Oh my gosh, I can get a PR.” She topped her regional time from last week by more than a minute.

“I knew that I wanted to get a medal so I had to stick in the top 20,” Larkin said. “I was just of sort of eyeing the people in front of me.”

Behind Larkin, sophomore Erin Fagan placed 32nd in a personal-best 20:14.95. She’s continually lowered her times throughout the season, beating her time last week by nearly 20 seconds.

“I don’t really have much strategy,” Fagan said. “Usually I try to stay back at the start because I like passing people. That kind of motivates me.”

Beyond running with less pressure, Fagan believes the team benefited from the cold weather — “I felt really good, and not being able to feel my legs, that helped,” she said.

In the Class 6A boys race, Free State sophomore Charlie Johnson placed 41st in a personal-best 16:56.96. He was the school’s only state qualifier.

“Everyone always goes out pretty quick at state,” Johnson said. “After the one mile, coach (Steve Heffernan) tells us to chase one. So basically to just try to catch whoever is in front of you. Then on the 800, I pretty much ran until I was about to throw up.”

Lawrence High junior Evann Seratte was the school’s only state qualifier for the 6A state meet, but she had plenty of company at practices this week.

Seratte, who ran cross country for the first time this season, took 76th place in 21:36.87. She said she “struggled” at the end of the race, but was happy that she could experience the environment of the state meet.

“I’m really grateful to be surrounded by a team that pushes me and wants me to do the best that I can,” Seratte said.

During the summer, Seratte decided to run cross country because she hoped it would help her in track, where she is among the top 400 and 800 meter runners in the state.

She started the season on the junior-varsity team after opening the cross country season with an iliotibial band injury in her right leg once she started running hills. Trying to transfer from track to cross country, she gained an appreciation for her new sport.

“Cross country is way harder,” Seratte said. “I think the mental aspect puts it above and beyond any other sport.

“I’m definitely optimistic about what I’m going to get out of this. I know I started the season just doing this so I could get better at track, but I know I’ll definitely be back next year just because cross country … I love it now.”