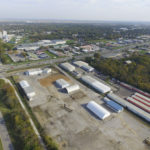 A maintenance yard located at 711 E. 23rd St., just east of the campus of Haskell Indian Nations University, has been purchased by the Lawrence school district.

Work is underway on a multimillion-dollar school district project just off of 23rd Street.

No, there’s not a new school coming, but it will be a facility that will play a big role in helping maintain school buildings across the district.

Last month, the Lawrence school board approved a lease-purchase agreement totaling $5.03 million with KBS Constructors Inc. to develop the district’s new maintenance yard and facilities/operations division at 711 E. 23rd St. In addition, BG Consultants Inc. was awarded a $364,000 contract to provide design, bidding and construction administration of the project. The 7.4-acre site is the former Douglas County Public Works yard, which is just east of Haskell Indian Nations University and just south of the 23rd Street overpass.

The new facility will replace the district’s current maintenance facility at Second and Maine streets near Lawrence Memorial Hospital. The district has outgrown that facility, said Tony Barron, the district’s executive director of facilities and operations. Major problems include a lack of space for offices, storage and parking at the site, which is home to district custodial, grounds and maintenance functions.

Getting a new maintenance facility, though, will cost a bit more than district officials planned. Securing the city’s approval for the 23rd Street site plan took longer than anticipated, Barron said. That delay and the need to do more grading for site preparations than anticipated increased construction cost from an estimated $4.8 million to $5.05 million, he said. Kathy Johnson, the district’s executive director of finance, said the Lawrence school board approved a lease-payment agreement in June to develop the new yard. The district will make annual lease payments of $550,000 during the 10-year duration of that agreement. The district’s capital outlay fund will pay for the project and the $500,000 land acquisition cost, she said.

Five buildings have been razed, and site preparation has started for the coming construction.

The biggest and most expensive new facility in the project will be a 13,500-square-foot warehouse, Barron said. Its construction and the repurposing of an existing building as a shipping and receiving dock will cost $3.32 million.

The new warehouse will save the district the $166,902 it is currently spending annually to lease needed storage space, Johnson said. Those annual storage lease payments were made from general fund revenue, which can now be used for classroom needs, Barron said.

“One of our very intentional goals with the project was to spend capital dollars to reduce stress on the general fund,” he said.

The other big-ticket facility to be constructed on the southwest portion of the property will be a new $1.74 million facilities and operations administrative and trades center, Barron said. It will include administrative offices and provide workspace for various trades such as electrical, HVAC and plumbing. It will also have conference and training spaces the current site lacks, he said.

One of the existing buildings on the site will be the new home of the district’s grounds operations, and another will be used for vehicle maintenance, Barron said. The former city hazardous waste center, which was built in 2009, will be converted to the district’s carpentry shop, he said.

An opportunity to move

At the current site, Barron said, the department’s vehicles have to be “strategically” parked in the fenced yard at the end of each workday. That’s time-consuming, and bottlenecks can develop in the morning as crews attempt to leave for job sites, he said. There also is not enough parking at the site for all 30 employees of facilities and operations, he said.

The site offers limited storage, which has forced the district to lease warehouse space since 2012, Barron said.

There is also very little administrative office space. Barron said when he was assigned his office, he displaced another employee, who was relocated to the conference room. Now, facilities and operations has no conference or training room space, he said.

The district stepped up planning to relocate the yard in 2015 when it hired BG Consultants to develop a use plan, Barron said.

“We looked at five properties the district owned,” he said. “They were all pretty raw and without infrastructure. Location-wise, they were all toward the outskirts of town. Ultimately, the only one centrally located, about 8.5 acres near Holcomb Park, we didn’t feel that was a good place to build, knowing it was dedicated to recreational use.”

A new opportunity presented itself in early 2016 when the county developed interest in the district’s existing yard. The county didn’t want the district’s facilities, but was keenly interested in acquiring the property adjacent to the land the county and Bert Nash Community Mental Health had agreed would be the site of a proposed mental health crisis intervention center.

Making the timing of that offer of greater interest to both parties was the availability of the county’s old public works yard at 711 E. 23rd Street. Barron said the two parties eventually negotiated a swap of the properties, which also had the district paying $500,000 to the county.

The district looks to relocate to the new yard at the start of the 2018-2019 school year, Barron said. The projected timeline would allow the district to make the move as summer capital improvement projects wind down and before demands on facilities and maintenance ramp up with the start of school.

“We’re hopeful the warehouse will be finished June 1, and the facilities and operations office on Aug. 1,” he said. “That’s a good time for us. We’re hopeful we get our occupancy permit near the end of July, and we can start moving in and be ready for the start of school.”