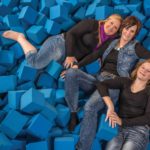 In this file photo from April 2016, Jo Ellis is shown with her two daughters, Mackenzie, left, and Paige, right. Ellis beat breast cancer in 2012. She has had six-month checkups that will end in February — her five-year anniversary of being cancer-free.

Nearly five years ago, Jo Ellis decided to stop sweating the little things. Ellis remembers when she used to get “intense” about minor problems, such as her kids not cleaning their rooms.

Now she says life is too short to get upset about it.

“What’s the point? I could die tomorrow,” Ellis said.

Her live-in-the-moment attitude comes from her own experience with mortality.

Ellis was diagnosed with breast cancer in 2012. She received an aggressive treatment, including 16 rounds of chemotherapy over the course of 20 weeks, a double mastectomy and reconstructive surgery. In five months, the cancer was gone.

Since then, she has had six-month checkups, which will end in February — her five-year anniversary of being cancer-free.

Ellis said maintaining normalcy was a huge part of her recovery.

“Normalcy is what you need to do to see the light at the end of the tunnel,” Ellis said, “instead of just people lying on the couch being depressed, saying ‘Why me?'”

She continued to work as a recreation program supervisor at Lawrence Parks and Recreation four days a week, missing only one day each week for chemotherapy treatments. She continued going to sporting events and school activities for her daughters, Mackenzie, 19, and Paige, 16.

Ellis said it’s important to surround yourself with a strong support group of friends, family and other patients. She said she made connections at a makeup class for patients facing hair loss because of chemo.

“You’ve got to talk to them because everybody’s going through something different,” Ellis said. “Some people are doing radiation, and some people don’t really know what’s going on.

“So just talk to people and share and laugh and cry, and just let it out.”

When her hair was falling out, Ellis let each daughter shave one side of her head, helping the family feel involved with her fight against cancer.

Her youngest daughter was part of the fight from the beginning. When Ellis first felt a marble-shaped lump in her breast, Paige told her it was probably breast cancer.

Ellis waited two months before she got tested. She said she was in a state of denial at the time, but now she recommends that any woman who feels an abnormality in her breasts to schedule a mammogram without delay.

“You have to think about your family and just be preventative on that,” Ellis said. “I always just tell people, do what you can. If the testing is there, go do it.”