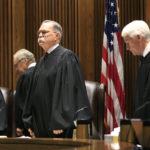 Topeka ? The Kansas Supreme Court today struck down a new school funding formula that lawmakers passed this year, saying it still does not provide adequate or equitable funding to ensure all public school students receive a satisfactory education.

However, the court did not follow through on its earlier threat to close public schools if the Legislature fails to enact a constitutional funding system. Instead, it gave lawmakers one more extension, until June 30, 2018, to solve the problems it identified.

“Staying the issuance of our mandate until June 30 is consistent with our general practice,” the court wrote. “But we also “must heed our duty to ensure Kansas students receive the education system guaranteed them by the Constitution. Without counting today’s decision, the education financing system has been judicially declared to be inadequately funded for at least 12 of the last 15 years — through school year 2016-2017. So after June 30, 2018, the demands of the Constitution cannot be further postponed.”

Justices Lee Johnson and Dan Biles issued separate opinions in the otherwise unanimous decision, saying they did not agree with giving the Legislature additional time to solve the problems in the new funding system.

The long-running school finance lawsuit, Gannon v. Kansas, was filed in 2010 after then-Gov. Mark Parkinson, a Democrat, ordered cuts in school funding in the wake of the Great Recession.

By 2013, a three-judge trial court panel found that the cuts had totaled more than $500 million at that time, and it struck down the funding system as unconstitutional.

In 2015, while an appeal of that ruling was still pending, Kansas lawmakers repealed the funding formula that had been in place since the early 1990s and replaced it with a system of block grants to school districts that effectively froze funding in place for two years while lawmakers were supposed to work on a new formula.

That move proved to be wildly unpopular, though, and many of the conservative Republicans who supported it were defeated in the 2016 elections by Democrats or more moderate Republicans.

In March, the Supreme Court struck down that block grant system, saying it was both inadequate and inequitable. It gave lawmakers until June 30, the end of the fiscal year, to pass a new formula.

Lawmakers responded by enacting a funding formula much like the one repealed in 2015. It provides a base per-pupil amount of money to each district and includes certain “weightings” for different categories of students to reflect the higher cost of educating them. It also gives districts limited authority to raise additional funds through local property taxes.

In Monday’s ruling, however, the court said the burden of proof was on the state to show how those funding levels were “reasonably calculated” to ensure all students receive an adequate education, and that the state had failed to do so.

For the Lawrence school district, the new formula meant additional base funding from the state of nearly $4.8 million this year, plus another $1.4 million in local taxing authority.

Lawrence school board president Shannon Kimball said the district also lost some funding in the new formula through changes in what are called “equalization aid,” subsidies the state provides in certain parts of the school funding mechanism to equalize property taxes between poor and wealthy districts.

“I am not at all surprised that the court found (the new) formula did not meet constitutional requirements,” Kimball said in a phone interview.

She also said she was pleased the court did not order schools to be closed until lawmakers pass a constitutional funding system.

“We need to educate our kids,” she said. “We need to operate our schools this school year, so I’m pleased that we will get to continue to do so.”

Like Kimball, Lawrence’s interim superintendent Anna Stubblefield said she was not surprised by the decision and that the district stands ready to work with lawmakers next year on a plan that addresses the court’s concerns.

“We also are grateful for the additional funding provided our schools this year,” she said in an email statement. “After three years of deficit spending to counterbalance student enrollment growth with the static nature of the state block grant system, the funding increase this year enabled our schools to provide teachers a well-deserved raise, implement a market study addressing the wages of classified support staff, offer professional development for educators around equity, culturally relevant teaching and technology integration, relieve some of the larger class sizes across the district with teachers hired through contingency and manage cost increases in employee health insurance, student transportation, internet services and utilities.”

Attorneys for the state argued that the funding levels were based on what they called a “successful schools model,” meaning they looked at funding levels in school districts where students performed better than would be expected, given the demographic makeup of the district.

But in its ruling Monday, the court rejected that argument out of hand.

“Stated simply and starkly, the State’s ‘successful schools’ model does not contain enough schools or districts meeting student performance standards — much less constitutional standards of adequacy — to warrant that label,” the court wrote.

Rep. Jim Karleskint, R-Tonganoxie, who served on the committee that wrote the new funding formula said he was disappointed in the decision, but that he needed to study it further before offering additional comment.

“This ruling shows clear disrespect for the legislative process and puts the rest of state government and programs in jeopardy,” Senate President Susan Wagle, of Wichita, Vice President Jeff Longbine, of Emporia, and Majority Leader Jim Denning, of Overland Park, said in a joint statement. “We will be in communication with our Senate colleagues about this ruling as soon as we have reviewed the decision with our legal counsel. As promised, Senate Republicans remain committed to providing every Kansas student with an exceptional education, however, raising taxes to fund this unrealistic demand is not going to happen.”

Alan Rupe, lead attorney for the plaintiffs in the case, called the decision a “bitter-sweet” victory.

“The Plaintiff School Districts agree with the sentiment that a remedy should come sooner. Significant damage has already been done as the State continues to ignore its constitutional obligations,” Rupe said in a statement emailed to reporters. “Nearly one-quarter of all Kansas public school students (and higher numbers of harder-to-educate students) are currently failing to meet the State’s standards and are being denied a constitutional education. While we are hopeful that the Legislature will comply with its obligation, we are disappointed that the relief for Kansas public schoolchildren will not come sooner.”

Gov. Sam Brownback, who is not expected to be in office by the time lawmakers convene in January, issued a statement on the ruling Monday evening.

“Today’s court decision is yet another regrettable chapter in the never ending cycle of litigation over Kansas school funding,” he said. “The court should not substitute its decision for that of the legislature.”

“Today’s ruling by the Kansas Supreme Court comes as no surprise,” Ward said in a news release. “I, along with many other Democrats and Republicans, identified several of the problems referenced by the Court today. The Democratic caucus is ready to get to work immediately on crafting a constitutionally sound school finance formula that ensures student success for all Kansas school children, no matter their zip code.”

Republican candidate Mark Hutton, a former lawmaker from Wichita, said he is anxious to see an end to the litigation.

“The education of Kansas children is of paramount importance to our state and it is time to bring all sides to the table and find a solution to this never-ending argument,” he said in a statement. “Kansans are tired of watching lawyers argue in a court room — while their tax dollars pay both sides’ legal fees instead of being used to benefit our children, teachers, and classrooms.”