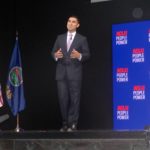 Faiz Shakir, national ACLU political director, speaks Sunday, Oct. 1, 2017 at the Lied Center launch of a national campaign to expand voting rights. Shakir shared victories the ACLU has won against voter suppression measures but said the grass-roots campaign would take the offensive to expand voting rights and participation in the American democracy.

In the home county of the “king of voter suppression,” the American Civil Liberties Union announced Sunday a nationwide campaign to go on the offensive to expand voting rights.

That king would be Kansas Secretary of State and Lecompton resident Kris Kobach, whose name was mentioned often by the ACLU speakers addressing a nearly full house at the Lied Center, and a national webcast audience watching the launch of the organization’s Let People Vote campaign.

Like a basketball post player, the ACLU could continue to swat away such measures in court, Ho said. But he and other speakers at the event said it was time to take another direction.

“We have to go on the offensive,” he said. “We have to work together to create the kind of inclusive democracy that is consistent with our highest aspirations.”

That offensive was especially necessary in light of President Donald Trump’s election integrity commission, of which Kobach is vice-chairman, speakers said. Kobach uses false narratives to make the case for unneeded solutions, said Micah Kubic, executive director of ACLU of Kansas. The presidential commission is a continuation of that ploy, with the false narrative being a defense of Trump’s unsubstantiated claim he lost the 2016 popular vote to Hillary Clinton because more than 3 million unauthorized immigrants voted in the election, he said.

The Let People Vote campaign looks to get out in front of the voter-suppression recommendations the presidential commission will develop, Ho said. The goal is to return to the bipartisan tradition of supporting and expanding participation in the county’s political system that prevailed from 1965 to 2008, Ho said.

Sunday’s launch, which was viewed by 600 house parties in all 50 states and Washington, D.C., was the first step in creating a grass-roots Let People Vote movement in support of expanding voting rights, said Faiz Shakir, ACLU national political director. It was hoped those house parties would morph into organizational meetings at the end of the webcast, he said.

The grass-roots movement would have different goals for different states, said Ronald Newman, ACLU director of strategic initiatives. Campaigns in Florida and a few other states would focus on ending the lifetime denials of voting rights for convicted criminals while the campaigns of other states would look to end gerrymandering that creates artificial legislative majorities for one party, he said.

According to materials shared at the event, the Kansas goals are to repeal Kobach’s election policies, expand the early voting period, allow election-day voter registration and develop a streamlined advance ballot application process. The final goal is for Kansas to withdraw from the Interstate Crosscheck Program, an interstate database of registered voters meant to prevent voter fraud but criticized as discriminatory toward minorities.

Shakir said the grass-roots effort would not be a one-time event, but would require years of advocacy to accomplish the goals in all states.

“It’s going to take a lot of work,” he said. “We will win because we are working all together.”