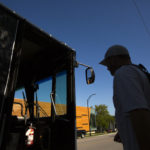 A Lawrence transit rider boards a bus on Thursday, Aug. 17, 2017 at the downtown bus hub at Seventh and Vermont streets.

After months of study, the City of Lawrence has revealed five possible locations for a bus station to serve city and University of Kansas bus routes.

Potential sites for the bus station include downtown, campus and western Lawrence locations. This is the second location study, and Public Transit Administrator Robert Nugent said this time the approach was different.

Nugent said the potential locations were not based solely on an operational analysis of the bus system. Rather, feedback from city commissioners and community members factored heavily into the choice of locations.

“That gave us an opportunity to temper all of the operational things with what we were hearing from the community,” Nugent said. “So that’s how we’ve come up with this list.”

The city revealed the five locations at City Hall on Wednesday evening, and residents were able to fill out a survey to evaluate the options based on specific criteria. The five possible locations for a transit center are as follows:

The city hired consulting firm TranSystems earlier this year to evaluate potential locations for a bus station. TranSystems consultant Sarah Frost said potential sites were eliminated for reasons such as the cost to buy the property and difficulty of construction at the site. Frost said input gathered from the community also played a part.

“We had a very robust public involvement piece with the surveys, meeting with the public, meeting with leadership, all of the institutions throughout the city,” Frost said. “So I think that really honed in.”

Initially, consultants identified about two dozen potential locations, using various factors to narrow down the list to the final five. When assessing sites, consultants considered criteria such as travel time, whether the location was buffered from residential neighborhoods, and ease of accommodating an indoor facility and fleet operations.

Ultimately, the City Commission will decide whether to move forward with constructing a bus station and where it would be located. If the project proceeds, there will be a secondary bus transfer point, but the five locations revealed Wednesday are identified as potential sites that could accommodate the primary transfer point with a building.

The city bus service has been using what was meant to be a temporary location in the 700 block of Vermont Street as its main transfer point for years. That location has no indoor facility but is across the street from the Lawrence Public Library.

The first location study was completed in 2014, but the potential locations identified were eventually ruled out, some after strong opposition from neighborhoods. A plan for a bus hub near KU’s Ambler Student Recreation Fitness Center was pursued, but abandoned last year after the city failed to win a federal transportation grant that would have covered half of the project’s cost.

The city has set aside $5 million to build the bus station, and Nugent said that money is just waiting for a decision. He said it will be up to the City Commission as to whether the proposed sites will be pursued.

“It’s just waiting for us to make up our mind where we want to put the $5 million,” Nugent said.

Wednesday’s meeting followed meetings in August that gathered feedback about the desired characteristics of the hub. The survey given at the meeting will also be available on the city’s website.

Nugent said the location study will be complete by the end of the year. He said final recommendations and feedback from the public survey will likely go to the City Commission in January for consideration.