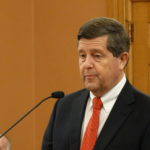 Alan Conroy, executive director of the Kansas Public Employees Retirement System, tells lawmakers that the financial health of the fund is improving, despite the state failing to make some recent payments, Monday, Nov. 27, 2017, at the Kansas Statehouse in Topeka.

Topeka ? On paper, it sure looks like the state pension fund for teachers and other state and local government workers lost ground in 2016. After all, state lawmakers eliminated a nearly $100 million payment that was due to the pension fund.

But officials on Monday insisted that retirees — and state employees who someday hope to retire — have no reason to worry about their future pension checks.

Conroy delivered that message as part of the retirement system’s annual report to the Legislature about the actuarial value of the pension fund and its estimated “unfunded liability,” which is the difference between its current assets and its long-term obligations.

KPERS is a pension system that manages the retirement accounts of nearly 305,000 members. Those include state employees as well as city, county and school district employees. There are currently 152,119 active workers contributing to the system, 96,774 retirees drawing benefits, and 55,755 “inactive” members who have paid into the system in the past and have retirement accounts, but are not yet retired and are no longer working for a public employer that participates in the system.

Several things happened over the last several months that affected the fund, including the elimination of a $97.4 million payment that the state was supposed to make in 2016. Lawmakers this year also delayed another $64 million payment, and they plan to delay another $194 million in payments next year, although those are scheduled to be repaid with interest over 20 years.

Those moves, however, will have little impact on the overall health of a fund now valued at just more than $18 billion. The biggest change, Conroy said, was a decision by the KPERS Board of Trustees to lower its assumption of how much the investment fund will earn in future years.

For many years, KPERS operated on an assumption that it would earn, on average, 8 percent a year, and that assumption held true for decades. In fact, over the last 25 years, Conroy said the fund has actually averaged 8.4 percent.

Looking into the future, however, there are many economists who say an 8 percent average rate of return may be overly optimistic. As a result,, the KPERS board in 2016 lowered its assumption to 7.75 percent, a change that had a large impact on projections of future income.

The result of that was to increase the unfunded liability by more than $500 million, to $9.06 billion.

But Rep. Steven Johnson, R-Assaria, who chairs the Joint Committee on Pensions, Investments and Benefits, said that is no cause for worry.

“There is a significant amount in the trust fund. The risk to benefits is not there,” he said.

Sen. Laura Kelly, D-Topeka, noted that the system is now nearly 67 percent funded. That means if no more new money were put in, and no new employees were added to the system, the fund would have 67 percent of all the money it needs to pay the obligations it has incurred.

“That’s a safe zone, between 60 and 80 (percent),” Kelly said. “It’s an improvement over the past, so we’re going in the right direction.”

Conroy said any level below 60 percent generally is cause for alarm, but anything between 60 and 80 percent is considered acceptable, at least over the short term.

Under current law, the state is scheduled to gradually increase its employer contributions into the fund on behalf of state workers and public school employees so that by 2021, the unfunded liability will stop growing and will be gradually paid off over the following 15 years.