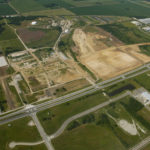 The former Farmland site is seen in this aerial photograph on Monday, July 1, 2013.

Officials with a water district downstream from Lawrence are not happy with the notice they received about the city’s release of nitrogen-contaminated water into the Kansas River.

The Kansas Department of Health and Environment has authorized the city to release up to 30 million gallons of nitrogen-contaminated water over the next several months as part of a makeshift plan to clean up the former Farmland Industries fertilizer plant in eastern Lawrence. That authorization was given a few weeks ago, but Mandy Cawby, a spokeswoman for independent public water district WaterOne, said neither KDHE nor the city notified WaterOne at that time.

Cawby said WaterOne initially learned about the KDHE authorization from an article published Friday morning in the Journal-World. She said she received an email from the city late Friday, but that she doesn’t think there was a concerted effort to bring the district into the loop.

“Since Monday morning, we have contacted KDHE and Lawrence,” Cawby said. “We initiated those contacts to try to understand and get more information about what it is they intend to do and to express our concerns about the lack of advance communication.”

WaterOne is a public water utility that serves 425,000 people, or about 15 percent of Kansans, Cawby said. That includes part of Miami County and most of Johnson County, including the cities of Overland Park, Shawnee and Lenexa.

The city removes the contaminated water from the groundwater stores under the former fertilizer plant. The city is authorized to release up to 500,000 gallons of nitrogen water per day and must adhere to certain concentrations and river flow requirements. Nitrogen can be harmful, but KDHE officials previously told the Journal-World they don’t expect any impact because the nitrogen will be heavily diluted. The authorization is temporary, lasting until April 1, and the city must regularly monitor water conditions.

Tom Stiles, assistant director of the KDHE Bureau of Water, said there isn’t necessarily a protocol for when downstream water districts are notified. He said they did not notify WaterOne or other districts because the conditions placed on the release made it a “nonissue” as far as the impact on water quality.

“When we ran through it, we didn’t think this was a cause for concern,” Stiles said. “There’d be no impact on the river, so it hadn’t risen to a level of us saying we better alert everybody that this is happening.”

Regarding WaterOne’s concern about the level of communication, City Manager Tom Markus said the city can always do better.

“I suppose we’d all like to have the earliest possible communication,” Markus said.

Cawby has another concern. She said that during two phone calls Monday with city staff, she asked the city to consider delaying the discharge a week to give WaterOne time to look over the information about the release. She said she is concerned that no modeling was done and that WaterOne wants to ensure monitoring is frequent enough to account for temporary spikes.

“They did not seem receptive,” Cawby said. “And because they began discharging (Tuesday) within 18 hours of that conversation, I think that’s an accurate assessment of how they responded to our request.”

The authorization to release the water into the river came about because the city’s storage tanks on the Farmland site are at capacity and ongoing efforts to distribute the water by pipeline to farms, where it can be applied as fertilizer, have not been sufficient. Before the KDHE authorization, the city’s plan was to truck the water to additional farmers.

Utilities Director Dave Wagner said the city did a limited run of the nitrogen water release on Friday for a couple of hours. He said more nitrogen water was released Tuesday, and he anticipated daily releases during the temporary authorization period. Regarding WaterOne’s request for a delay, Wagner said the city provided data indicating the releases would have a very minimal impact due to the KDHE conditions and explained the storage issues.

“I think from our perspective, we advised that time is of the essence for us to work the operation out,” Wagner said. “We actually just started up (Tuesday) afternoon and are working on it a little bit today as well. We are not pausing at this point in time.”

Brandon McGuire, assistant to the city manager, also said the release should be put into context. He said wastewater treatment plants also contribute to nutrient pollution, and noted that the city’s new plant, scheduled to open next year, will have processes to reduce the release of nutrients such as nitrogen.

“(The release) is not something that we’re happy to have to do, but we are making many other efforts on an ongoing basis to try to mitigate our overall nutrient discharge,” McGuire said.

Cawby said WaterOne received the requested documents about the KDHE authorization and operational plan late Tuesday. She said they have not determined yet whether any actions, such as increased monitoring of nitrogen levels or switching the district’s water source from the Kansas River to the Missouri River, will be needed.

The city took ownership of the former fertilizer plant in 2010 with the plan of using part of the 467-acre site for a new business park, VenturePark. The city paid nothing for the property, but accepted responsibility for cleaning up environmental issues left behind by the bankrupt fertilizer plant. The city received an $8.6 million trust fund that Farmland had set aside for cleanup.