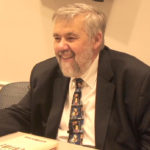 In this file photo from May 2011, Bill James chats about his book Popular

Bill James, senior baseball operations adviser for the Boston Red Sox, will speak Wednesday evening at the University of Kansas as part of this year’s James Naismith Lecture Series.

James’ keynote address, “Transitioning from Naïve to Professional Research,” will take place at 8:30 p.m. in Woodruff Auditorium at the Kansas Union, 1301 Jayhawk Blvd. The event is free and open to the public.

Known in the baseball world as the “Sultan of Stats,” James is one of most prominent authors on the sport. Though not a statistician by trade, he is credited with coining the term “sabermetrics,” the use of which by Oakland Athletics general manager Billy Beane in the 1990s was chronicled in the book “Moneyball” and its 2011 film adaptation.

James, a Holton native, received bachelor’s degrees in English and economics from KU in 1973, followed by an education degree (also from KU) in 1975. In 2009, he received an Alumni Distinguished Achievement Award from KU’s College of Liberal Arts and Sciences.

The James Naismith Lecture Series was created in spring 2008 to honor the inventor of basketball and the founder of KU’s basketball program. The series has included topics such as exercise physiology, sports psychology, sports management and administration, sports medicine, health and science education, and KU’s athletic history and tradition.