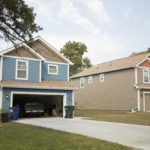 Two homes sit within the location of a formerly blighted property at 908 LaSalle Street, in this photo from Sept. 14, 2017. The homes were a project of Lawrence Habitat for Humanity and Lawrence Tenants to Homeowners and were paid for in part with 00,000 from the city’s affordable housing trust fund.

A review of the city’s building requirements that aimed to significantly reduce construction costs for new homes has fallen short.

The Affordable Housing Advisory Board set a goal to lower the cost of building a home by 5 percent within two years, and city staff has been reviewing the city-controlled building and development costs to identify potential changes.

At the board’s meeting Monday, city planning officials told board members that there is no silver bullet and that to meet the 5 percent goal would require significantly changing the quality of subdivisions in Lawrence.

“I think what it demonstrates in some regards is that there wasn’t a lot of fluff there to skim off the top,” said Scott McCullough, director of planning and development. “We’re paying for the cost of what it takes to construct the house.”

The board used a $200,000 home for the exercise, and city staff reviewed a list of about 80 city-controlled building costs compiled by the Lawrence Home Builders Association. As part of the meeting Monday, city staff went over about a dozen potential changes that together would reduce the building cost by about $2,000, or by 1 percent.

Those recommendations include changing the permit fee structure so that smaller, less complex homes are charged a lower, flat rate. McCullough said another consideration is having model plans for permitting so that the city would have them on file and builders wouldn’t have to spend money on the same plans over and over.

“This can directly go to the affordability issue,” McCullough said.

Other recommendations call for reducing the number of street trees required from one every 40 feet to one every 50 feet. Others call for increasing the thresholds for when traffic and sewer studies are required.

Board chair Matt Sturtevant said that although he was hoping that more construction cost reductions would be found that the information would be helpful going forward.

“In terms of what we do next, we have a goal that we haven’t met,” Sturtevant said. “The question is do we go back to the drawing board and keep looking at options until we get to the 5 percent, even if we dig deeper than what the city was willing to do. Or do we say this is what we can get to?”

Board member Dana Ortiz pointed out that the goal to reduce costs by 5 percent left open more possibilities than what had been reviewed thus far. She said that she thinks the board should focus on other code issues affecting housing costs, such as those affecting density.

“This is not where the savings are going to come,” Ortiz said. “I think the goal is still valuable, but just this is not the key to that goal.”

McCullough also told the board that the city’s review only looked at costs that the city controls, and there are other significant factors affecting the cost of construction. He said those include land availability, land prices and profit margins.

Ultimately, the board voted unanimously to send the building cost review and the recommended changes to the City Commission for consideration. Specifically, the board will recommend that city staff continue to pursue the changes that would result in the 1 percent cost reduction.

Sturtevant said the board would also continue to look at other options to reduce construction costs, noting that it would take multiple small steps.

The goal to reduce construction costs is one of several goals set by the board last year. The board also helps oversee the city’s affordable housing trust fund and makes recommendations to the City Commission about how those funds should be spent. Last week, Lawrence voters approved the repurposing of a 0.05 percent sales tax that will go toward the trust fund and is expected to generate about $1 million annually.