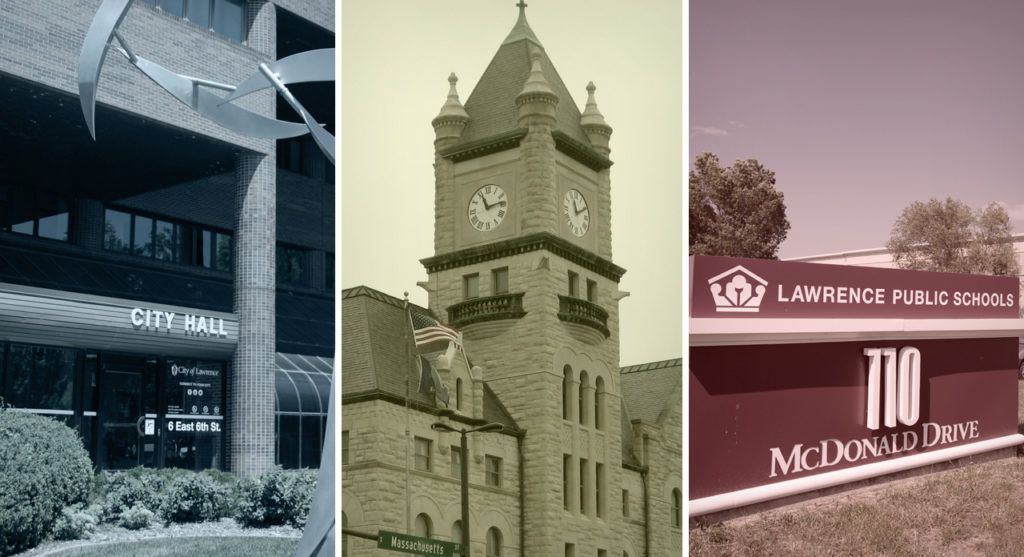 There is a room at City Hall that tells an unflattering story about local politics.

On the fourth floor, in a small meeting room, there are rows of photographs of past Lawrence mayors, from the city’s founding to the present. The hairstyles change, the clothes change, but for the most part one thing is consistent.

Of the 88 local politicians on the wall, only eight are women. But that story is changing.

Incoming City Commissioner Jennifer Ananda, an attorney and social worker, said she thinks having women represented in politics is a first step.

“I’d like to say we come from a relatively open-minded community, but there are things that haven’t changed, that stay the same,” Ananda said. “And to see Lawrence stepping up to the plate and being a leader and getting more diverse voices to the table, this is step one.”

This step has taken time. Nancy Hambleton, the first woman elected to the City Commission — also the first female mayor — said more than 40 years ago that it was time for change. 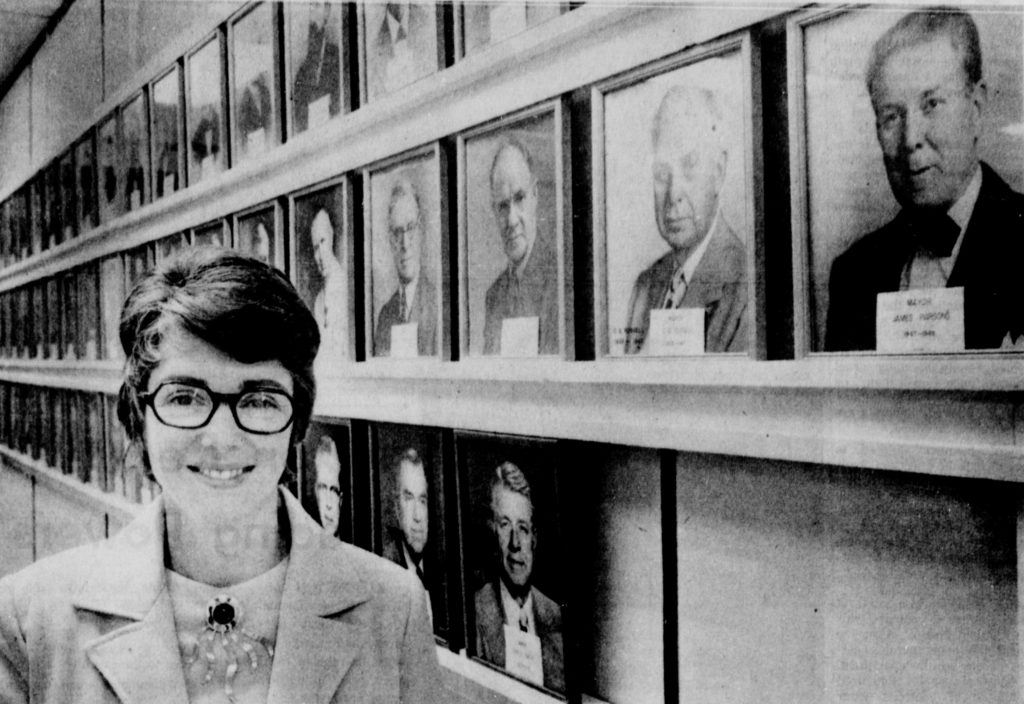 Nancy Hambleton, the first female mayor of Lawrence, stands next to a wall of portraits of previous mayors at City Hall in this 1973 file photo.

“Women are just as capable as men, and I think it’s time they should be encouraged to develop their talents,” Hambleton, who died in 2015, told the Journal-World when she was named mayor. “Women’s rights is not the big problem right now, I think at this stage what you need to do is to encourage women to participate.”

That hasn’t necessarily been the case. In the 46 years since Hambleton’s election, the presence of women on the City Commission has been sporadic. The commission was all men just three years ago. Following current Mayor Leslie Soden’s election in 2015, the subsequent appointment of Commissioner Lisa Larsen was the first time in almost 20 years that two women held commission seats at the same time.

In addition to the City Commission, the election of incumbent school board candidate Melissa Johnson and newcomer Kelly Jones means that women will hold five of the seven seats on the board. When Douglas County Commissioner Michelle Derusseau was elected last year, she joined longtime Commissioner Nancy Thellman on the three-member County Commission.

Soden said she thinks the increased representation of women in local politics is fantastic.

Thellman said she is surprised that it’s taken this long to have diverse representation on all three boards, but that it’s a good move for the community. However, she emphasized that the candidates are highly qualified and add value beyond their gender.

“I think it helps paint a more complete picture of who we are, and so that should make for fuller discussion and hopefully better decisions,” Thellman said. “It is important, though, that these women were chosen, I think, for more than just their gender. They were excellent candidates; the qualities they bring to their boards are really important.”

School board president Shannon Kimball said the change is obviously significant, and perhaps part of a larger national trend.

“I think that over the past year in particular there has been a great deal of interest in and encouragement of women becoming more involved in politics, either at the local, state or national level,” Kimball said. “Women have been encouraged to step up to the plate and seek out those leadership roles in a way that is a bit different than what I believe has been the case in the past.”

Jones, a social worker, also said she thinks what is happening in Lawrence is a reflection of a national trend of women taking more leadership roles. She said she thinks factors behind that include last year’s presidential election, the Women’s March on Washington, and the current discussions about sexual assault and harassment.

“All those factors I think lead to a place where we are today, where women are able to access power,” Jones said.

For her part, Jones said mainly she had been waiting for when she had enough time in her professional and personal life to run for office, but the national political climate was also a factor. Jones attended the Women’s March with her two teenage daughters and said a desire to be a good role model for them was part of her decision.

“It would be disingenuous to say that being there with my daughters did not push me over the edge to run,” Jones said. “It certainly did contribute to my decision to run.”

The day after President Donald Trump’s inauguration, the Women’s March brought hundreds of thousands of women to the streets of Washington D.C. and various other U.S. cities to protest. Part of the message that came from the event encouraged more women to pursue political office.

Trump has been criticized for negative comments he’s made about marginalized populations, including immigrants, Muslims and women. Trump was also dismissive of a video in which he boasts about being able to do whatever he wants to women, including grabbing them by their genitalia.

Kimball said she thinks seeing Hillary Clinton running for president and the subsequent Women’s March energized women to get more engaged in the political process. She said she also thinks some of the things Trump has said about women, and that there wasn’t a greater negative response, is part of the greater activism.

“Some of the things that the president in particular said and is alleged to have done are really concerning as a woman,” Kimball said. “And the reaction to those things was concerning to me — that those things didn’t cause people to say, ‘Whoa, this is not acceptable behavior, these are not acceptable ways to talk about or treat women.'”

Ananda said that, personally, she has been working toward public office for a decade, but that she also thinks the disparagement of women in national politics has been influential.

“I do think our national political scene has inspired more women to make their voices heard,” Ananda said. “That there is something valuable that is missing when those voices aren’t at the table.”

Melissa Johnson, a teacher and former Marine, felt a need to get more involved. Johnson said she regularly attended school board meetings, and she felt a “tugging.” Johnson said women have always contributed, but that taking office gives them a chance to come out from behind the scenes and get recognition.

“We’ve been behind the scenes for so long,” Johnson said. “And I think it just shows a lot of how our world is progressing. And we can credit women in the past who have been fighting for the rights that we have now, so we can run for these positions and get elected.”

Thellman said although the change should be celebrated, equal representation goes beyond just gender, and she hopes the community will continue to expand the diversity of representation.

“I hope we’ll keep striving to bring up candidates who reflect our whole community: some racial diversity, some diversity in age, in gender ID and sexual orientation,” Thellman said. “The more complete our picture is, the better the view we have, the better decisions we’ll make.”

Kimball also said that Lawrence has had women — such as State Sen. Marci Francisco and former Kansas Insurance Commissioner Sandy Praeger — who served in local government and went on to hold higher office. She said she thinks it’s important for women to be in leadership positions and also to be seen in leadership positions.

“I think that serves to provide role models and inspire our young women to seek out those challenges themselves,” Kimball sad. “I think that is one way in which having this circumstance has a very positive impact going forward.”

And as more women assume those leadership roles, there will be one wall in City Hall that will mark the change.

The office of mayor in Lawrence is a mostly ceremonial role, traditionally going to the commissioner who received the most votes in the last election. If tradition holds, current Vice Mayor Stuart Boley will take over from Soden in January. After that, Larsen and Ananda would each take on the role.

Once Soden’s term is over, her photograph will be added to the wall. She said it will be nice to see those rows and rows of photographs at City Hall start to change.

“It’s mostly a wall of white men, so it’ll be cool to have the bottom row (be) almost three women in a row,” Soden said.