Tom Keegan: Jayhawks not the same without master of all volleyball trades Madison Rigdon 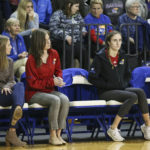 For the second match in a row, Kansas senior outside hitter Madison Rigdon, from Pflugerville, Texas, was sidelined because of an undisclosed medical condition Wednesday night at Horejsi Center, with rival Kansas State in town.

Rigdon, a first-team All-Big 12 performer and an honorable mention All-American as a junior, watched from the bench, wearing sweats and pigtails and appearing to be quite a bit thinner. The Jayhawks missed her, didn’t look as smooth, started sluggishly and then rebounded to defeat K-State in four sets, 14-25, 25-21, 25-15, 25-22.

There was an accomplished doctor in the house, KU chancellor Dr. Doug Girod, but he couldn’t do anything to cure whatever it is that ails Rigdon. As for whether Girod, who sat courtside next to seventh-year athletic director Sheahon Zenger, can cure what ails the KU football program, well, that’s a discussion for a later day. He hides his cards well. Anyway, this is a volleyball column. One crisis at a time, please.

Rigdon does for the Jayhawks what Draymond Green does for the Golden State Warriors, which is another way of saying a lot of everything and all of it good. Green can be overshadowed by even bigger stars, Stephen Curry and Kevin Durant, and the same can be said for Rigdon, who teams with senior All-Americans Ainise Havili and Kelsie Payne. But just as there isn’t anybody on the Warriors who can match Green in doing so many different things so well, Rigdon is KU’s most versatile player. Both athletes lead their teams in intensity.

No. 11 KU (20-5 overall, 10-2 in Big 12) hustled its way to victory against Kansas State (9-16, 2-10), but it’s going to take more than effort for Kansas to make a deep run in the NCAA tournament, which gets underway Nov. 30. It’s going to take a team at full strength, a team with Rigdon whistling service aces, soaring for kills, diving for digs, passing precisely, going high and strong at the net for blocks and infusing teammates with energy with everything she does.

“A six-rotation player in volleyball is pretty rare,” Kansas coach Ray Bechard said. “She’s a high level (player on the) back row, front row, best server. They let us substitute so much and we specialize so much that over the last eight to 10 years, a six-rotation player has become a little bit harder to find.”

Bechard said he was confident that “eventually” Rigdon would return to the lineup.

“Day to day, day to day, I know she has another appointment tomorrow, and we’ll see where she’s at,” Bechard said. “From a privacy standpoint, it’s not something we can really talk about.”

Players who took on increased roles will benefit from the experience, but there is no overstating how important Rigdon, who is having a tremendous senior season, is to the Jayhawks. Bechard didn’t hesitate when asked what of her many strengths is most difficult to replace.

“I think we miss her passing, and that leads to everything we do offensively,” Bechard said. “We can go other places and find kills, but it’s hard to find as steady a passer and server as she is.”