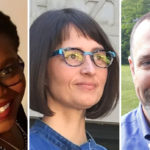 From left, incumbent Melissa Johnson and newcomers Kelly Jones and Ronald “G.R.” Gordon-Ross were the top vote-getters in the Lawrence school board election, Tuesday, Nov. 7, 2017.

Voters returned incumbent Melissa Johnson to the Lawrence school board and selected newcomers Kelly Jones and Ronald “G.R.” Gordon-Ross to join her on the seven-member board.

Johnson, a second-grade teacher in the Kansas City, Kan., school district, started out on top of the contest with the release of advance ballot totals shortly after 7 p.m. Tuesday and maintained her first-place standing as precinct totals were counted. Jones and Gordon-Ross similarly held tight to the second- and third-place positions throughout the evening in the five-way race for the three board positions on this year’s ballot.

Johnson, who was appointed to the board in April to fill the unexpired term of resigning board member Kristie Adair, said she was experiencing many of the same emotions she had when she was picked for the open seat.

“It feels great,” she said. “It’s the same nervous feelings and the same excitement about starting to work for the district.”

Nonetheless, Johnson said being elected to the position was special.

“I think being elected shows the community’s confidence in what I’m doing,” she said. “I want to help continue contributing to the district and students and keep doing the thing with the people on the board and working with the newly elected members.”

One of those newly elected members, Jones, watched results come in Tuesday with Johnson at the Douglas County Courthouse. Jones, the associate director of field education for the University of Kansas School of Social Welfare, was already looking ahead to one of the first tasks before her as a new board member. The school board will interview finalists for the open district superintendent position in January and is scheduled to fill the position in February.

At home Tuesday evening after attending a school function, Gordon-Ross said he was pleased with his election and that of Johnson and Jones.

“I think all three of us were hoping we would get to serve together,” he said.

It was the IT professional’s second campaign for a school board seat, having come up short two years ago. Gordon-Ross said he would spend the next two months preparing to go to work in January.

“I will be learning as much as I can,” he said. “I’ve signed up for district diversity training and (for) attending a seminar in Wichita for newly elected board members. I accepted an invitation to sit down with (board president) Shannon Kimball for a conversation on how the board works.”

The candidates will be sworn in for four-year terms at the school board’s Jan. 8, 2018, meeting. Jones and Gordon-Ross will replace board members Marcel Harmon and Vanessa Sanburn, who chose not to run for re-election.

The election results are unofficial until a Nov. 15 canvass by the Douglas County Commission.