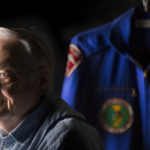 Among some of the moments that Lawrence resident Eric Walther remembers from his days serving in the U.S. Air Force were being fired upon while flying to a military base in Vietnam and surviving a midair collision in Bangkok, Thailand. Walther, who is 86, is pictured on Thursday, Nov. 2, 2017 at his home.

As chaplain for the Lawrence American Legion Dorsey-Liberty Post No. 14, he will still have an important role in the parade. He will deliver the opening prayer for the 1 p.m.. parade before it makes its way from Seventh and Massachusetts streets to South Park.

As he leads the prayer, Walther may give a private thanks for surviving a midair collision near the end of his 20-year career in the U.S. Air Force.

The experience occurred during the 11 months he spent in 1971-72 flying a C-47 transport plane in Vietnam. Walther joined the Air Force in 1953 when he graduated from what is now the University of Central Missouri in Warrensburg, Mo. After additional Air Force schooling in meteorology at St. Louis University, Walther was stationed in 1954 in South Korea, giving weather briefings to departing pilots.

Walther would go on to earn his wings in 1958 and was trained to fly multiengine airplanes such as the C-47, which had been in production since 1941. His job on the day of his near-death experience was to fly a planeload of passengers from Saigon to Bangkok, Thailand.

“I remember it was a beautiful morning,” he said. “Mornings in the tropics are often hazy, but that day was crystal clear. I remember looking down when we flew over the capital of Cambodia at the sun glistening off the golden roofs of the temples. It was a striking sight. It really was a beautiful day.”

The tranquility of the morning was shattered as Walther, in the C-47’s co-pilot seat, and pilot Dwight O’Neill were preparing to land at a Bangkok air base.

“We got cleared to make an approach for landing and were about 300 foot in the air when a big bang occurred,” he said. “Dwight said, ‘What was that?’ and I looked out the windshield and could see two Royal Thai T-23 jet trainers flying away and pieces of metal falling off of them. I said, ‘Dwight, I think we’ve had a midair collision.'”

The two pilots could see the collision had removed most of one of the plane’s wings, Walther said. Fortunately, the C-47 was the last airplane manufactured with wing fuel tanks between the fuselage and wing-mounted motors, Walther said. That allowed the motor to maintain power, he said.

“If we had lost power to that motor, we would have died,” he said. “To maintain straight and level, we had to cross control it so much we were making the control pressures we would have used to make a steep right-hand turn. That kept us going straight. I noticed Dwight’s knuckles were white and his face was ashen. I said, ‘Dwight we’re still flying. Let’s get this sucker on the ground.'”

They did land safely, as a Distinguished Flying Cross Medal Walther received for helping get the plane on the ground attests.

Other missions during his year in Vietnam included flying VIPs to various destinations and resupplying in-country U.S. military bases, Walther said. The most memorable of the resupply missions was his first.

“I vividly remember we were carrying cargo to a base that was in danger of being overrun,” he said. “They were running out of supplies, ammunition and food. We were to land there at night. I was told I needed to fly the pattern higher, faster and steeper than you normally would and not to turn any of the aircraft lights on. I established a flight path faster than normal, and I looked down and I said to my check pilot (co-pilot), ‘What are all those guys doing off the end of the runway? It looks like they’re smoking cigarettes.’ He said, ‘Eric, they aren’t smoking cigarettes. They’re shooting at us.'”

His most interesting VIP shuttle involved flying an ambassador to Kathmandu, Nepal, where the airport is 10,000 feet above sea level.

“We were virtually flying cruise power when we landed,” he said. “It’s a different experience. Instead of slowing down, you literally fly the airplane onto the ground.”

By the time he used his skills to survive the Bangkok midair collision and the challenging base resupply missions, he was one of the Air Force’s three or four most experienced C-47 pilots, Walther said. His earliest experience with the plane was soon after he’d completed multiengine flight school in 1958.

He and his young family were stationed in the Pacific, where he flew missions into the eyes of typhoons, as hurricanes are called west of the International Date Line.?

“They sent me to Guam,” he said. “I was convinced typhoons were dangerous and weather reconnaissance was dangerous because two weeks before I got there, they lost an airplane on a mission. They never found the plane or the crew.”

He would fly 22 weather reconnaissance missions into the eyes of tropical storms to drop instrument packages that measured their temperature, barometric pressure and humidity, Walther said. Turbulence was bad, but he came to trust the C-47s could withstand the storms, he said. Nonetheless, there was one mission that stood out, he said.

Going into the storm’s eye, a strong updraft lifted the plane more than 5,000 feet per minute, Walther said. Exiting the eye into an equally strong downdraft was more harrowing.

“There’s a gauge on the instrument panel that tells you how fast you are going up or down,” he said. “It goes from zero to 5,000 feet. In the downdraft, the gauge was pegged at 5,000 feet per minute. The aircraft commander called for max power, and we were still going down at 5,000 feet per minute. I remember going through 6,000 feet and thinking, ‘I hope the hell we get out of this.’ Then at about 5,000 feet, we pulled out of it.”

Walther left the Air Force in 1974 with 20 years of service. With the Vietnam War ending, there was a glut of pilots on the job market, forcing him to look at other employment opportunities. Through a meeting with a recruiter visiting his air base, he landed a human resource position with General Electric and was charged with hiring a crew to manufacture the company’s first heat pump. He completed that task just as the nation’s first energy crisis derailed the project.

“They decided they weren’t going to manufacture the heat pumps, so I laid 135 people off and one other person,” he said. “That last person I laid off was myself.”

An opportunity to develop a wage and benefit analysis for TRW Cable brought him and his wife, Lyn, to Lawrence in 1975. He would have a number of positions before starting with Packer Plastics, now Berry Plastics, where he worked until his retirement in 1994. He and Lyn also bought the Strawberry Hill Christmas Tree Farm just west of Lawrence, nurturing the trees for a decade before opening it for its first season in 1984.

His military career put him in danger on occasion, but Walther said those fighting on the ground in Vietnam had it much worse. What all veterans have in common is doing their duty in defense of the country, he said.

“People have asked me what I did when I saw people shooting at me on the resupply missions,” he said. “I said, ‘I continued with the mission. Those guys were depending on me.’ A lot of people don’t realize you knowingly put your life in jeopardy because you have a job to do, and my job at that point was to deliver that cargo to that base. It’s just like typhoon reconnaissance. A guy is a damn fool to fly into a hurricane, but that’s your job.”

Correction: An earlier version of this article listed an incorrect start time for the parade.