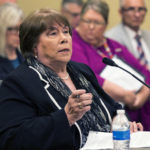 In this July 27, 2016, file photo, Phyllis Gilmore, secretary of the Department for Children and Families, answers questions at a committee meeting in Topeka, Kan. (Emily DeShazer/The Topeka Capital-Journal via AP, File)

Gilmore, 72, has served as DCF secretary since February 2012, when she was appointed to succeed another embattled secretary, Rob Siedlecki.

“Those accomplishments can be directly attributed to the countless hours Phyllis devoted with single-minded focus on helping build strong families. I am thankful for her devotion and wish her the very best in the next chapter of her life,” he said.

“When I was appointed as secretary of the agency, I made a commitment to serve Governor Sam Brownback on his vision for a brighter future for Kansas children and families,” Gilmore said in the news release. “I would like to thank Governor Brownback for giving me the opportunity to work tirelessly for the children and families of Kansas and to serve as a part of his Administration. It has truly been an honor and a privilege.”

Gilmore has been the target of harsh criticism from Democrats, as well as some Republicans, for her management of the agency. Some have accused her of adopting an unwritten policy of discriminating against same-sex couples in the placement of children in foster care or adoptive homes, an accusation she has denied.

She has also been criticized over the number of children who have died while in foster care, or after DCF had previously been notified of suspected abuse or neglect.

After a series of Legislative Post Audit reports criticized the department’s management of the child welfare system, lawmakers this year established a task force to review the entire system in Kansas. That panel, however, is not scheduled to issue its report until January 2019, after a new administration is sworn into office.

Last month, during one of the first meetings of that task force, it was reported that more than 70 children in the foster care system were reported as missing, prompting calls for Gilmore’s firing from people who said she seemed both unaware and unconcerned about that information.