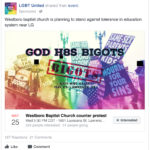 This partially redacted screenshot, provided Wednesday, Nov. 1, 2017, by the U.S. House Intelligence Committee, shows a Facebook ad for a counter-protest in Lawrence against Westboro Baptist Church. The ad was one of the 3,000 purchased by Russian operatives during the 2016 elections.

Just about every year, the Westboro Baptist Church shows up to protest graduation ceremonies at Lawrence and Free State high schools.

That’s not news to anyone familiar with the hate group’s tactics. What makes Westboro’s protest at the 2016 LHS commencement ceremony newsworthy more than a year later is the revelation Wednesday that Russian trolls organized the counter-protest and publicized it to thousands of Kansas Facebook users.

The counter-protest ad was among a sampling — released Wednesday by the U.S. House Intelligence Committee — of the 3,000 purchased by Russian operatives during the 2016 elections. Their motive, experts say, was stirring up division in an already ugly and emotion-fueled election cycle.

In the case of the Westboro counter-protest, a group called LGBT United was created seemingly for the sole purpose of advertising the event on social media. The event page has since been removed, but a snapshot makes clear the message Russian operatives were trying to spread:

“Westboro baptist church is planning to stand against tolerance in education system near LGBT-friendly Lawrence High School on Wednesday, May 25 ( 1901 Louisiana St, Lawrence, KS 66046). They want to ‘remind this nation that the parents, students, teachers and high school staff celebrate disobedience to God’s law.’ They are just inciting hate riots and violence! What a bunch of bigots! All they do is spread hate and homophobia! … Let`s protest against these idiots and completely piss off WBC because #GodH8sBigots!”

Not all of Russia’s activity was intended to intervene in the election, said Salve Regina University professor James Ludes, who has written on Russia’s influence on the United States.

The ads on divisive issues such as race and gun ownership — or even organizing opposing rallies across the street from each other — are meant to “attack political cohesion” and make Americans turn against one another, he said.

“It’s not intended to benefit once candidate or another per se, but raise political temperature,” Ludes said. “Make us feel like we are coming apart at the seams.”

It’s not clear how many people showed up to the counter-protest, though photos shared on Facebook at the time (by a self-described Tonganoxie resident) indicate at least a dozen counter-protesters participated, with colorful signs in tow.

(The Westboro Baptist Church representatives apparently had shown up at the high school that evening despite the LHS graduation ceremony being moved to Allen Fieldhouse due to inclement weather.)

Lindsay Buck remembers her students being skeptical of the counter-protest at the time.

Buck, who chairs the LHS special education department and sponsors the school’s Total Equality Alliance, said her TEA club students discussed the dubious Facebook event during a meeting that spring. To her knowledge, the students didn’t participate in the counter-protest because, even back then, it had seemed “a little sketchy.”

Buck said she’d even received an email from someone who identified themselves as “Jack K. Adams” from LGBT United. The organizer’s seeming obliviousness to the ubiquity of Westboro’s protests across the state made Buck skeptical, she said.

But she had “no idea” that she and her students, along with more than 11 million other Facebook users across the country, had been targeted by a troll farm with ties to the Russian government.

Buck said she planned to discuss the news with her students this week.

“Honestly, that would be good to talk to the kids about, too,” she said of sifting through questionable sources. “…I’m glad that at the time students questioned it and researched it.”

Metadata shows the “God H8s Bigots” anti-Westboro rally ad cost Russian operatives more than 3,000 rubles, or roughly $50, to place on Facebook, where it generated nearly 4,800 impressions. The ad targeted Kansans from age 14 to 65-plus, specifically those whose interests included LGBT rights, the LGBT community, Bernie Sanders and Hillary Clinton.

LGBT United, the group behind the Westboro counter-protest, also purchased an ad promoting a pro-Bernie Sanders coloring book called “Buff Bernie: A Coloring Book for Berniacs.” The ad describes the book as “full of very attractive doodles of Bernie Sanders in muscle poses.”