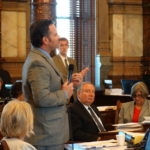 Topeka ? The Kansas Senate launched a marathon debate Tuesday over its own version of a school funding bill, one that is slightly smaller than the recently-passed House version, but was forced to put the debate on hold shortly before 10 p.m. so it could turn its attention to a tax bill.

Senate leaders called for the break after House Republican leaders expressed frustration over the length of the debate, which had gone on nearly six hours. The House has a rule that it cannot meet after midnight, and leaders there were anxious to pass a tax bill out of both chambers on Tuesday, the 102nd day of the session.

The Senate school funding bill would phase in a $236 million increase in school funding over two years and make a number of other changes in education policy.

Like the House bill, it would raise base per-pupil aid to $4,006 for the upcoming school year. But in the second year, the Senate plan would only raise the per-pupil formula to $4,080, or $48 less than the House version.

It also increases the additional money districts get for students who qualify for free meals, money that districts use for programs that target students at risk of failing or dropping out, but the increase is slightly smaller than what the House bill provides.

According to estimates by the Kansas State Department of Education, the Lawrence school district would see an increase of $3.1 million in state aid next year under the Senate plan, compared to $3.4 million provided under the House bill.

The Senate bill also would give Lawrence access to about $1.4 million in additional local option budget money through a change in the formula for calculating the limit on those budgets.

Sen. Jim Denning, R-Overland Park, who chaired the Select Committee on Education Finance that produced the bill, borrowed language from the Kansas Supreme Court when he said several times that the amounts are “reasonably calculated” to ensure schools are able to provide all students with an appropriate education.

As they did in the House, Democrats in the Senate said the funding increase was too small and would be unlikely to satisfy the Kansas Supreme Court, which has threatened to close the public school system after June 30 if lawmakers don’t pass a constitutional funding plan.

“I think that both the House and the Senate bills are inadequate, quite frankly,” Democratic Leader Anthony Hensley of Topeka said.

He proposed an amendment that would have nearly doubled the price tag of the bill, phasing in a $420 million increase over two years. His plan also would have continued raising base per-pupil aid for five years, reaching $4,522 by the 2022-2023 school year.

Hensley argued that the “high water mark” for base funding in Kansas was $4,400 in the 2008-2009 school year, just before the onset of the Great Recession. When state revenues started collapsing that fall, then-Gov. Mark Parkinson, a Democrat, ordered huge cuts in all forms of state spending, including K-12 funding, which prompted four school districts to file the current lawsuit, Gannon vs. Kansas.

But Denning said he didn’t believe the court would demand lawmakers return to that level of funding, as long as they can justify the amount they settled on.

Denning said the figure of $4,080 per pupil in the second year was “a solid calculation” that was based on testimony received in committee hearings.

“We feel confident that we will satisfy the adequacy (requirement) with our base at $4,080,” he said.

“I don’t understand how we can possibly say that the plan the Senate has before it is going to be adequate when five years from now we are behind where we were eight years ago,” Hensley replied.

“You know when you look back, since Montoy, the track record of this Legislature has been pretty bad in responding in a constitutional manner,” he added, referring to the Supreme Court’s 2005 ruling in the last school finance case, Montoy vs. Kansas.

The marathon debate over the bill lasted more than six hours, with senators offering at least 18 amendments.

One controversial part of the bill would prohibit cities and counties from offering tax abatements on the statewide 20-mill property tax that helps fund public schools, or on the 8 mills districts are allowed to levy for big-ticket purchases known as capital outlay.

Sen. Pat Pettey, D-Kansas City, offered an amendment to strike that provision, but it failed to pass.

Pettey also tried unsuccessfully to delete a provision that says school districts will have to get permission from the Kansas State Board of Education before they can issue bonds for sports stadiums or other extra-curricular facilities.

Meanwhile, conservatives like Sen. Ty Masterson, R-Andover, argued against the entire concept of a per-pupil funding formula, calling it a “grand deceit” because people look at the base amount and believe that’s all the state spends for schools, ignoring the weighting factors and other funding such as retirement contributions the state makes for school employees.