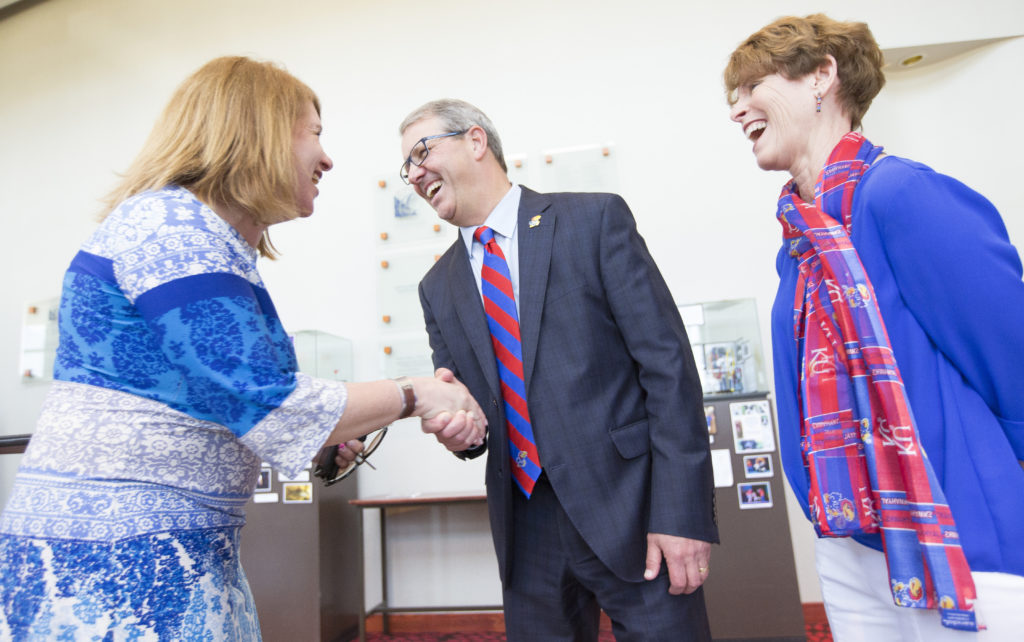 Dr. Doug Girod, executive vice chancellor of the KU Medical Center is congratulated by Lisa Pinamonti Kress, director of admission at KU with after being announced as the 18th chancellor of the University of Kansas on Thursday, May 25, 2017 at the Lied Center. At right is Girod's wife, Susan Girod.

A medical doctor and the top administrator at the University of Kansas Medical Center will be the next chancellor of KU.

The Kansas Board of Regents announced its selection and formally voted to hire Girod as KU’s 18th chancellor Thursday during a special meeting called on KU’s Lawrence campus. The board has yet to approve a salary. Girod will begin the new job on July 1. 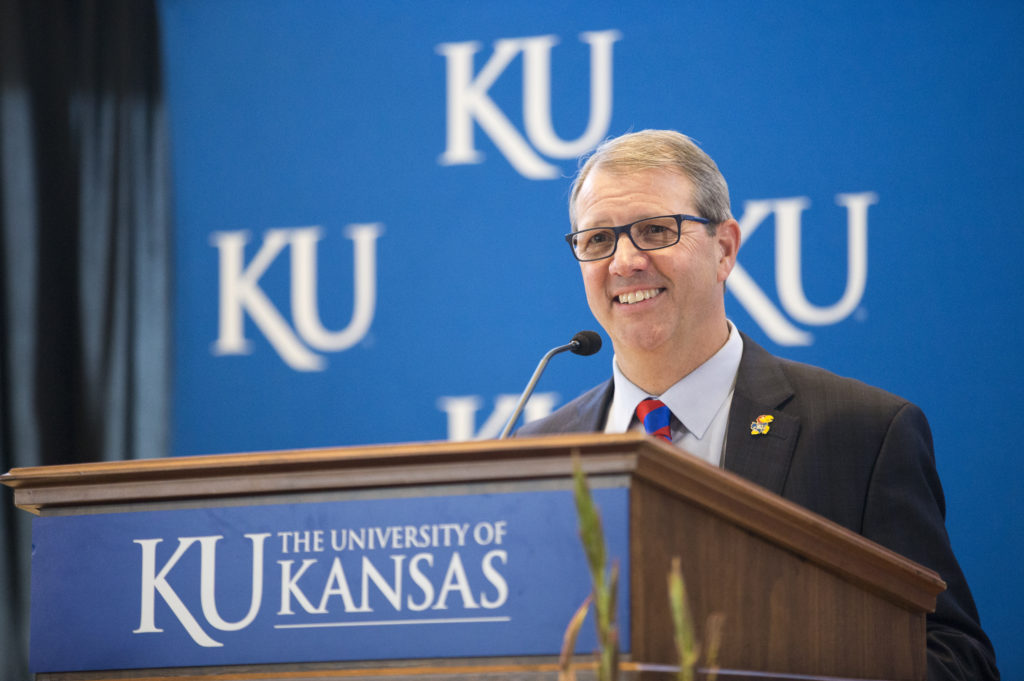 “I’m very excited about the opportunity, and honored and humbled,” Girod told the Journal-World on Thursday. “After 23 years of working at KU, obviously I’ve learned to love the institution and the state. We are in such a great trajectory as an institution, and we’ve accomplished so much…it’s just a very, very exciting time to be here.”

Girod said recruitment, retention and graduation rates would be one key focus.

“The overall student experience on our campus I think is going to be really important,” he said. “We’ve made a lot of great strides in all those areas but we have room to grow there.”

Research will be another major priority, Girod said. Not only is it critical for maintaining KU’s status in the prestigious Association of American Universities, it also helps economic development in the state and region.

Introducing Girod on Thursday, Board of Regents Chair Zoe Newton called Girod, “the person we believe is best positioned to bring the University of Kansas into the future.”

Girod has been involved with medical center efforts to expand KU’s reach across Kansas, including to rural populations. KU Health System has increased partnerships with other hospitals and practices across the state, too.

Girod is an otolaryngology — or ear, nose and throat — surgeon, specializing in treatment of and reconstructive surgery following head and neck cancer. His leadership is credited with advancing KU Hospital’s national rankings in the field.

Prior to joining KU, he was vice chairman and research director in the department of otolaryngology at the Naval Medical Center in Oakland, Calif., according to his KU profile. Girod was in the U.S. Navy Reserve, from 1982 until being honorably discharged in 1997, reaching the rank of Lieutenant Commander and later earning the Meritorious Service Medal.

In the Kansas City area, he’s worked on numerous health and economic development initiatives. He’s also led and participated in medical missions to developing countries in Africa and Latin America.

Moving to the chancellor’s residence on the Lawrence campus and overseeing the entire university — including KU’s roughly 19,000 undergrads — will be a culture shift.

Girod said he looks forward to the “intensity” and “enthusiasm” on campus.

“It’s a different vibe, to be sure, and a very exciting one that we’re looking forward to immersing ourselves in,” he said.

Girod, 59, and his wife, Susan, currently live in Mission Hills. Girod is a native of Salem, Ore. He has three adult children, he said.

The KU chancellor, the university’s chief executive officer, oversees the university’s main campus in Lawrence, the KU Edwards Campus in Overland Park and the KU Medical Center campus in Kansas City, as well as smaller School of Medicine campuses in Wichita and Salina. The chancellor also oversees KU research and educational centers in Hays, Parsons, Pittsburg and Topeka plus the Kansas Law Enforcement Training Center in Yoder. 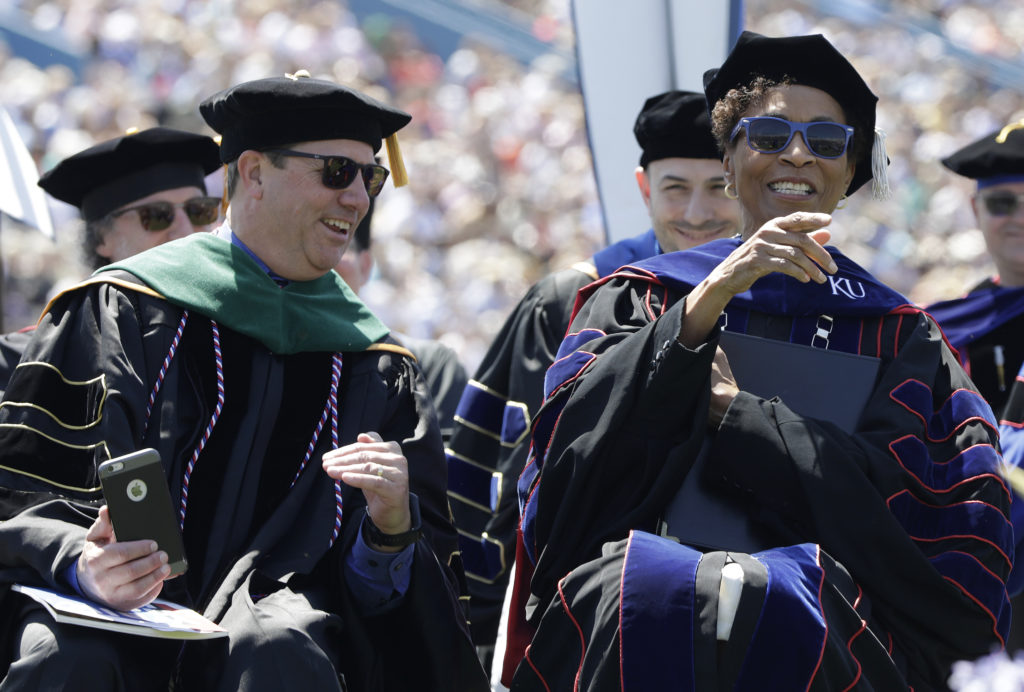 Douglas A. Girod, M.D., executive vice chancellor of the University of Kansas Medical Center, left, and KU Chancellor Bernadette Gray-Little react to chants from the graduates asking Gray-Little to stay one more year. Gray-Little has announced she is stepping down this summer. The two participated in the KU commencement ceremonies Sunday, May 14, 2017 on the KU campus.

A KU insider, Girod has the advantage of having worked alongside outgoing chancellor Bernadette Gray-Little.

She said, in a news release from the Board of Regents, that Girod will bring a “wealth of experience” to the role.

“He is a proven administrator and an excellent listener, and those on the KU Medical Center campus already are well familiar with Dr. Girod’s steady guidance and leadership abilities,” Gray-Little said. “I congratulate him, and KU is in good hands. I know he will continue our work to fulfill our mission and elevate the national stature of our university into the future.”

Gray-Little, 72, announced in September that she would step down this summer. Gray-Little, formerly provost and executive vice chancellor at the University of North Carolina at Chapel Hill, became KU’s 17th chancellor in 2009.

The Board of Regents launched a closed search process, meaning names of all candidates and finalists are kept confidential, in late fall.

A 25-member chancellor search committee, chaired by KU alumni and former Kroger CEO David Dillon, vetted candidates and presented finalists to the board. The board interviewed finalists earlier this week.

“The number of top tier professionals who wanted to be the next KU chancellor was impressive,” Dillon said, in a news release from the Board of Regents. “Dr. Girod will certainly use his impressive credentials and abilities to carry out the mission of KU.”

Responsibilities: Oversees KU schools of medicine, nursing and health professions — home to more than 3,300 students, 2,100 faculty and 4,000 staff; research funding of nearly $100 million; campuses in Kansas City, Wichita and Salina; and outreach activities in every Kansas county as well as western Missouri.

Medical specialty: Otolaryngology (ear, nose and throat) surgeon, specializing in treatment of and reconstructive surgery following head and neck cancer. Specific areas of focus include tumors of the mouth, thyroid and parathyroid glands.

Past positions at KU: Joined KU Medical Center faculty in 1994, became chair of the Department of Otolaryngology-Head and Neck Surgery in 2002. Also served as senior associate dean for clinical affairs for the department, and interim executive dean for the KU School of Medicine.

Previous employment: Vice chairman and research director in the department of otolaryngology at the Naval Medical Center in Oakland, Calif.

Military service: U.S. Navy Reserve, from 1982 until being honorably discharged in 1997. Girod reached the rank of Lieutenant Commander and later earned the Meritorious Service Medal.

Professional involvement and honors: Past president of the American Head and Neck Society and vice president of the Triological Society. Among numerous honors, Girod received the 2006 Student Voice Award for Teaching on a Surgical Rotation, bestowed by KU School of Medicine students.