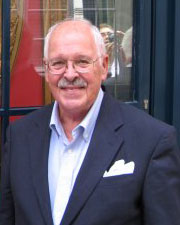 University of Kansas professor emeritus of art history Edmund Eglinski was known as an advocate for learning through direct experience.

Eglinski’s own dissertation on 13th century painting in Siena followed a Fulbright award to study in Italy in 1961, and he later taught multiple study abroad courses in Europe, according to the KU art history department.

Eglinski, 85, died Sunday in Lawrence of a heart attack, according to his Journal-World obituary.

“Ed devoted his career to teaching and he inspired many students,” art history professor and department chair David Cateforis said, in an email. “I knew him as a kind and supportive colleague who gave me a lot of good advice in my early years in the department.”

Eglinski joined the KU faculty in 1963 and retired in 2001. He served as department chair in the 1990s, regularly taught courses in Medieval and Renaissance Italian art, and published an introductory textbook, “The Art of the Italian Renaissance,” in 1968, according to information from the KU art history department. He taught courses abroad in Great Britain, Italy and France between 1982 and 2000.

From 1985 to 1990, Eglinski ran a series of summer workshops for K-12 teachers, according to the art history department. Called “Educating the Senses,” the three-week workshops featured KU faculty lecturing on arts, literature, drama, history and music.

Eglinski himself started his career as an elementary school teacher, according to his obituary.

Born in Lorain, Ohio, he received degrees in art and education from Bowling Green State University. According to his obituary, Eglinski taught fourth grade in Lorain until being called to active duty with the Air Force, serving as an intelligence officer during the Korean War.

Eglinski went on to obtain a master’s degree in art and a doctorate in art history from the University of Iowa, before getting the job at KU.

In retirement, Eglinski enjoyed traveling with his wife, Pam, and also making paintings of his own, according to his obituary.

“The subject matter ranged from mountain scenes in the tradition of Cezanne, to quickly dashed watercolors in his own distinct style,” the obituary said.

Cateforis said a tribute to Eglinski’s belief in the importance of traveling to see and learn firsthand from art and architecture continues in the Edmund Eglinski Prize for Study Abroad in Art History. The competitive scholarship, which was established after Eglinski’s retirement, benefits KU undergraduates studying art history in Europe.

Contributions to the Edmund Eglinski Prize for Study Abroad in Art History fund may be made through the KU Endowment Association.