Evolution of DNA technology shaped lab over past 40 years, and will continue to 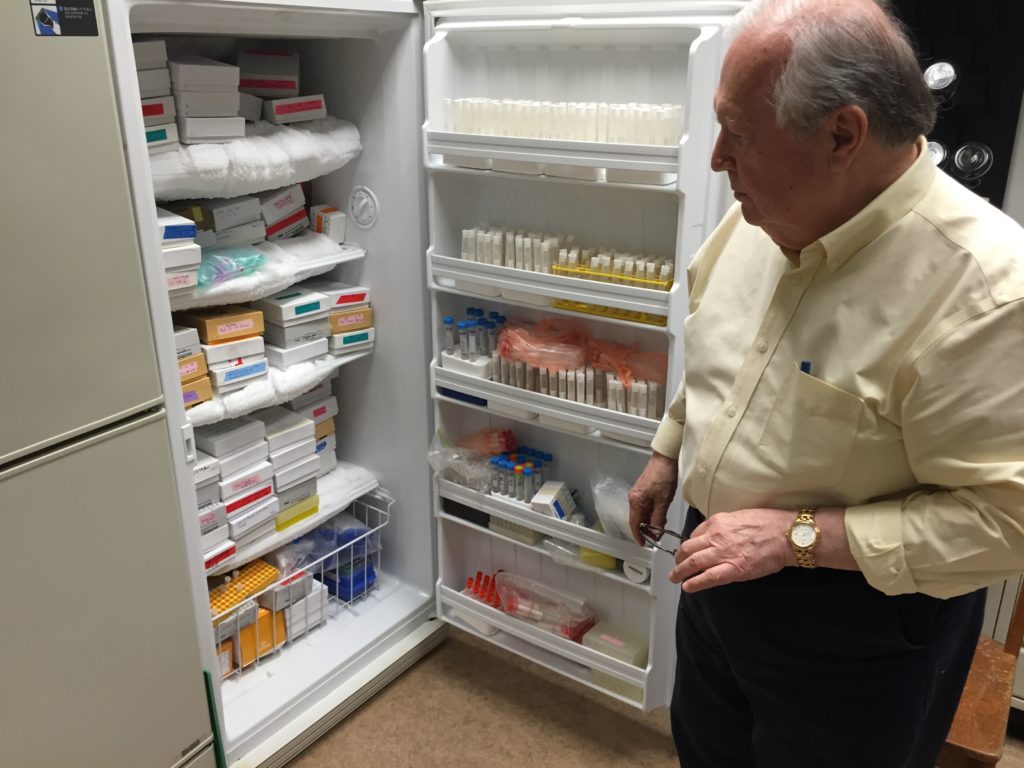 Michael Crawford, University of Kansas professor of anthropology and director of KU’s Laboratory of Biological Anthropology, shows some of the DNA samples the lab has collected and is using for population research on Monday, May 8, 2017.

In the basement of Lippincott Hall at the University of Kansas, there is a refrigerator and freezer filled with DNA samples from around the world.

They belong to KU’s Laboratory of Biological Anthropology. In the decades since he founded the lab, Michael Crawford’s research of populations has taken him to places as far-flung as Siberia and as close to home as Kansas’ Mennonite communities.

He’s explored questions such as, “Did Native Americans originally come from Siberia?” Yes, he said, and their DNA likenesses prove it.

Or “Do Mennonites live longer on average than other Americans?” Again, research shows the answer is yes, he said, and it’s attributed to the Mennonites’ unique lifestyle of no drinking, smoking or being sedentary. 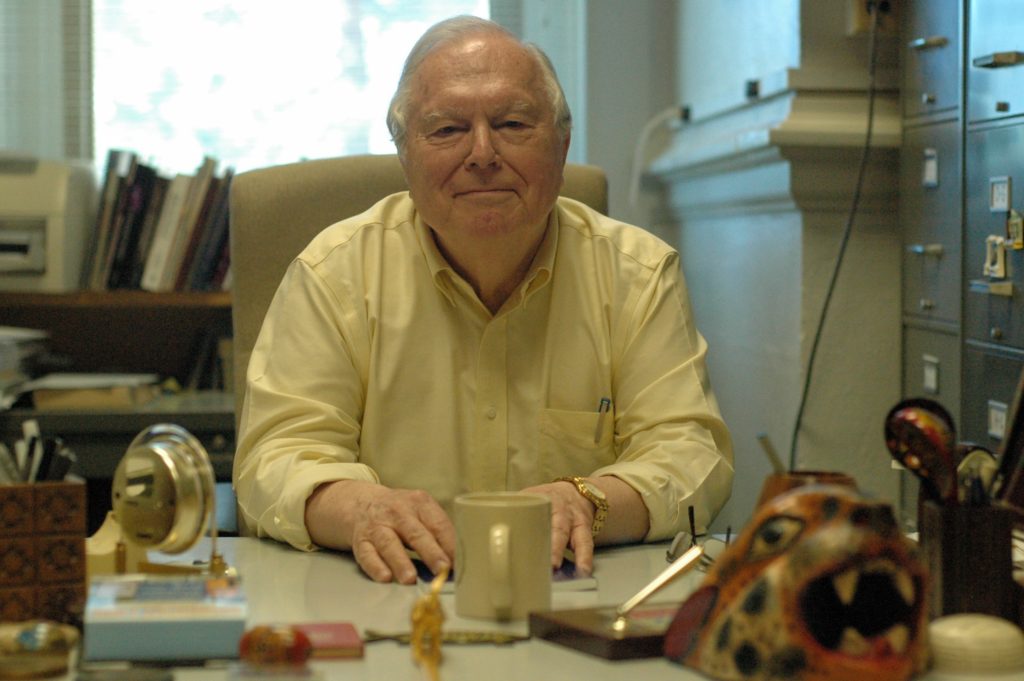 Crawford — professor of anthropology, founding director of the Laboratory of Biological Anthropology and a founder of the field of anthropological genetics — has been at KU since 1971 and founded the lab in 1975. After more than 45 years on the Hill, Crawford is retiring and in the process of handing over leadership of the lab to one of its products, Dennis O’Rourke, KU Foundation Distinguished Professor of anthropology.

O’Rourke, who got his bachelor’s through doctoral degrees at KU, was a student of Crawford’s who went on to become a renowned researcher in the field. He spent most of his career at the University of Utah until returning to KU in 2016.

Not only did Crawford found KU’s Laboratory of Biological Anthropology, he’s also a founding scholar of the subfield that’s become known as anthropological genetics, O’Rourke said.

“KU has been really at the center of much of the work in anthropological genetics,” O’Rourke said. “It’s become a significant sub area within the field of biological anthropology, and a lot of that credit goes to Mike Crawford for his early work in the 1960s and ’70s for crystallizing this as an area of academic focus.”

DNA technology has drastically changed the field during Crawford’s tenure, and will continue to evolve it.

Prior to arriving at KU, Crawford said he conducted his first population study of humans in 1968 across a number of isolated villages in Valle Maira, a small Alpine valley in Italy. Then, he was collecting information about the demographics of the villagers, where they were born and why they moved.

“We could hardly spell DNA in those days,” he said.

In 1968, a study he conducted in Mexico of an indigenous group called the Tlaxcaltecas, involved bloodwork, but still no DNA. He studied blood types, proteins and immunoglobulins to shed light on how the Tlaxcalteca population dispersed and became different over 350 years.

“They changed over time,” Crawford said. “That’s how evolution operates.”

Crawford said his first study to use DNA started in 1989, when he began researching “the peopling of the Americas.”

“We all thought that Native Americans came from Siberia, but there was no evidence,” Crawford said. Similarities in DNA “fingerprints” from both groups demonstrated that was, in fact, the case, he said.

Now, he said, anthropological genetics is being applied is by revealing disease patterns that differ based on where people come from and their ethnic backgrounds. That segues into the field of genetic epidemiology.

Crawford said he’s most proud of developing a field, starting with his 1973 book, “Methods and Theories of Anthropological Genetics.” 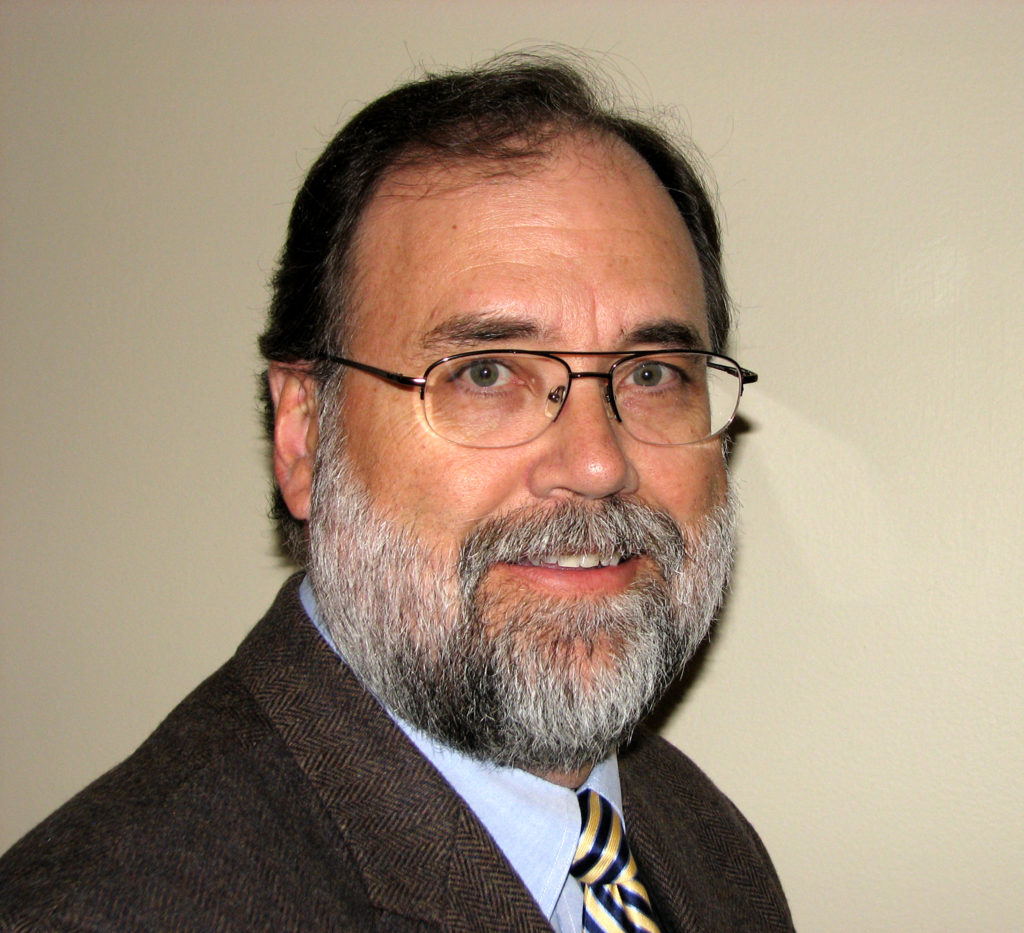 He’s also most proud of his students, including nearly 40 doctoral degree recipients and 20 post-docs.

“That’s part of the legacy of this is producing three generations of scientists in a field which didn’t exist until 1973,” he said.

Crawford is one year into a planned three-year phased retirement.

Kicking that off, in spring 2016, the journal Human Biology dedicated a special issue to the KU Laboratory of Biological Anthropology’s 40th anniversary, featuring publications by current KU professors and several of Crawford’s former students. Crawford was editor of the journal from 1989 to 2000, he said.

Beneath the umbrella of KU’s Laboratory of Biological Anthropology, Crawford also directs the Midwest Twin Registry.

O’Rourke said anthropological genetics and population studies will continue in the next phase of KU’s Laboratory of Biological Anthropology.

No doubt the field will continue to change, particularly in the area of genomics, he said.

O’Rourke’s own specialty is ancient DNA analysis, and it involves collaborations with ecologists and archaeologists.

“My lab does things today that we couldn’t even have thought of when I was a student here,” O’Rourke said. “The methods are allowing us to address questions that we never could before.”