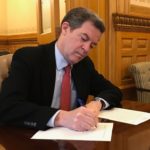 In this photo shared by the governor's office Thursday, March 30, 2017, Kansas Gov. Sam Brownback vetoes a bill that would extend Medicaid coverage to an estimated 150,000 people.

Topeka — Kansas lawmakers will spend a three-day weekend getting an earful from constituents about whether they should or should not override Gov. Sam Brownback’s veto of a bill that would extend Medicaid coverage to an estimated 150,000 people, most of whom are currently uninsured.

Brownback issued his veto around 9:30 a.m. Thursday, barely half an hour before the House came into session, asserting among other things that the bill would have provided care to “able-bodied adults” while elderly and disabled Medicaid recipients are on waiting lists for home- and community-based services. He also cited an outside actuary’s estimate that it would cost the state $1.2 billion over 12 years.

“Furthermore, this legislation ensures a significant increase in state and federal Medicaid dollars funneled towards abortion providers like Planned Parenthood,” Brownback said in his veto message.

The House immediately took up a motion to override the veto.

“I have sat in this body for 15 years and never heard a more dishonest statement than we just heard,” said an emotional Rep. Jim Ward, the House Democratic Leader from Wichita. “The governor pits working poor against the disabled.”

“If we allow this veto to stand, people will die. Hospitals and clinics will close,” Ward said.

The cost estimate that Brownback cited was conducted by the firm Aon Hewitt in 2015 for the Kansas Department of Health and Environment, and its findings have been widely disputed by other groups.

The Legislature’s own nonpartisan Research Department estimated it would cost the state only $27.4 million for the last half of the upcoming fiscal year, because the bill would not take effect until Jan. 1, 2018, and $62.1 million in the first full year of operation.

The timing of Brownback’s veto was conspicuous because Thursday was the deadline for the House and Senate to consider bills from the other chamber, except those that are exempt from deadlines. Both chambers were scheduled to adjourn Thursday for a three-day weekend, then return Monday to work on budget and tax bills, as well as other bills in conference committees.

Democrats tried twice to adjourn the House for the weekend, which would have given them time to round up the votes supporters of the bill would need for an override, but both of those efforts failed.

The House continued debate Thursday for more than an hour as emotions ran high in the chamber.

“When do we as a body run from our moral duty to our constituents?” asked Rep. John Eplee, R-Atchison. “Now our governor — and I was troubled over this also — presented this as an abortion bill, and I’m still having a hard time wrapping my head around that.”

Rep. Chuck Weber, R-Wichita, however, repeated Brownback’s assertion that people coming into Medicaid under the expansion program would squeeze traditional Medicaid recipients out of the health care market.

“KanCare is a disaster, but we’re going to dump, what, 150,000 people onto the marketplace?” he said. “Who is going to take care of them, and who is going to get shoved to the back of the line? The disabled, the mentally ill, pregnant women, the elderly.”

Finally, Rep. Russ Jennings, R-Lakin, pointed out that one member of the House was absent. That was Rep. Linda Gallagher, R-Lenexa, who was reportedly out of town attending a funeral in western Kansas, roughly five hours away.

Gallagher voted in favor of the bill in February.

Jennings pointed out that if the override motion came to a vote, there would certainly be a “call of the House” — a procedure that compels all House members to return to the chamber — and the House would have to sit still for the rest of the afternoon waiting for her to return and unable to act on any other bills that were on Thursday’s calendar.

Jennings then offered a motion to “table” the override vote, which essentially put the issue aside for a later time. Under the Kansas Constitution, lawmakers have 30 calendar days after receiving a veto message to vote on an override.

The debate over Medicaid expansion in Kansas is taking place against the backdrop of deep national divisions over whether to continue the federal health care law that makes it possible, the Affordable Care Act, also known as Obamacare.

President Donald Trump campaigned in 2016 on the promise that he would repeal and replace Obamacare as soon as he was sworn into office. Last week, however, the Republican-controlled U.S. House called off a scheduled debate on their plan to overhaul the program amid a split in the GOP caucus between moderates who said it would take away coverage from millions of Americans, and conservatives who said it didn’t go far enough toward repealing Obamacare in its entirety.

Trump said afterward that he would shift his focus to other issues, but Republican leaders in Congress have said they will continue trying to overhaul the program.