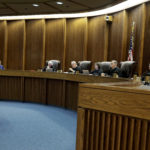 Topeka ? Attorneys for the four school districts that are suing the state over school funding formally asked the Kansas Supreme Court on Friday to reject the new finance system lawmakers enacted this year, saying the roughly $293 million in new money it would phase in over two years is neither adequate nor equitable.

Attorneys for the state of Kansas, on the other hand, said the new formula should be upheld because the new money is targeted to address specific needs the court has already identified.

Friday was the deadline for parties to submit written briefs in the next phase of the long-running legal battle. How the court rules after it hears oral arguments in mid-July will determine whether schools will open as scheduled in August for the state’s nearly 485,000 public school students, or whether lawmakers will be forced back into a special session this summer to come up with a plan that will satisfy the court.

“While the structure of the new formula passes constitutional muster, with a few exceptions, the implementation of the formula, specifically the magnitude of its appropriations, completely misses the mark,” plaintiff attorneys Alan Rupe and John Robb wrote in their brief.

The new law puts back in place a per-pupil funding formula that is similar in many ways to the one lawmakers repealed in 2015 and replaced for two years with a system of block grants.

In March, the Supreme Court ruled that funding under that block grant system was inadequate and unconstitutional, and it gave the Legislature until June 30 to pass a new plan that would meet constitutional muster.

It also includes certain “weightings” for different categories of students to reflect the higher cost of educating students in poverty, students from non-English speaking households, and others who are considered at risk of failing or dropping out.

The plaintiffs, however, say those base formula amounts are still lower than they were in 2008, before the state started cutting school funding in the wake of the Great Recession, which prompted them to file the current lawsuit.

They note that the Kansas State Board of Education, in its budget request last year, asked for base per-pupil funding of $4,604 in the upcoming year, and $5,090 the following year. That would translate to about $890 million in new funding in the second year.

In addition, the plaintiffs cited long-range budget projections to argue that the tax increase that lawmakers passed this year was not large enough to fund the inflationary increases that would be required in the third year, so there is no guarantee the Legislature intends to keep its promise beyond the second year.

Attorneys for the state of Kansas, however, urged the court to uphold the work of the Legislature.

In its decision in March, the Supreme Court specifically cited the fact that more than one-fourth of all students in Kansas were performing below grade level in state reading and math tests, and that there were wide achievement gaps between low-income and upper-income students.

The state’s brief says the new money provided by the Legislature is “reasonably calculated” to address the constitutional violations the court noted in March, and that much of the new funding is specifically targeted for educational efforts to bring at-risk students up to grade level.

The court has scheduled oral arguments in the case for Tuesday, July 18. A ruling in the case is expected soon after that.