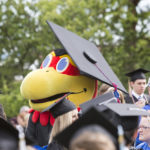 Big Jay looked the part during graduation on Sunday, May 15, 2016 in Memorial Stadium.

Turns out, it means a lot.

In 2015, a few years after the launch of the KU School of Education’s online master’s degree program, researchers at the School of Education set out to evaluate the experiences of students enrolled in online-only graduate courses at the school. What they found through the development of their “I’m a Jayhawk” scale was that online students identify as Jayhawks just as much as their on-campus counterparts. Not only that, but nontraditional KU students also identify with their school’s mascot more than students enrolled in online courses at other universities.

“It turns out that identifying with the Jayhawk — or whatever your mascot is — correlates well with a lot of the variables we’re interested in,” said Bruce Frey, a professor of educational psychology at KU who helped develop the “I’m a Jayhawk” scale. “In terms of satisfaction, in terms of, ‘Are you going to be a good alum one day?’ or even things like ‘How much do you identify with the university as a whole?'”

In short, the degree to which a student self-identifies as the university’s mascot offers insight into the student experience — or sense of belonging at the university — as a whole, said Frey, also a co-author of a study regarding the “I’m a Jayhawk” scale.

Frey, along with KU School of Education faculty members Aaron Clopton, Christopher Niileksela and Steven Lee — as well as doctoral students Andrea Garcia and Alan Nong — developed the “I’m a Jayhawk” scale. Researchers then broadened their scope, testing a generic version of the scale with 370 students taking online-only graduate courses at universities (more than 100, by Frey’s count) across the country.

Frey has a few theories about what makes the Jayhawk special, or “why it means something to be a Jayhawk.” While his research doesn’t delve into the topic, Frey suggests that the Jayhawk’s connection to Kansas history may also play a role. People who are born in Kansas or live here for extended periods of time refer to themselves as Jayhawks, a reference to the anti-slavery folks who made Lawrence an abolitionist bastion in the 1800s. The mascot’s ties to history, and its uniqueness among universities, make the Jayhawk a proud symbol for many students and Kansans, Frey said.

According to KU Info, several high schools and a few community colleges across the country have adopted the Jayhawk, though KU appears to be the only major four-year university with such a mascot.

“It’s a mascot that has meaning beyond whatever has been manufactured by an athletics department somewhere,” Frey said, referring to more ubiquitous mascots such as tigers, wildcats, bulldogs and bears.

Frey and his fellow researchers recently presented their “I’m a Jayhawk” scale and study at the American Evaluation Association’s national conference. They are also submitting an article for publication.

Student experience has become a concern of KU administrators in recent years, with groups like Rock Chalk Invisible Hawk generating dialogue around conditions for students of color at KU. Frey said the “I’m a Jayhawk” tool could be used to gauge different groups’ sense of belonging at the university, helping KU leaders to better understand students’ needs and in turn improving student experience.