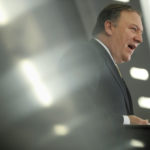 Washington ? CIA Director Mike Pompeo says he thinks disclosure of America’s secret intelligence is on the rise, fueled partly by the “worship” of leakers like Edward Snowden.

“In some ways, I do think it’s accelerated,” Pompeo told MSNBC in an interview that aired Saturday. “I think there is a phenomenon, the worship of Edward Snowden, and those who steal American secrets for the purpose of self-aggrandizement or money or for whatever their motivation may be, does seem to be on the increase.”

Pompeo said the United States needs to redouble its efforts to stem leaks of classified information.

“It’s tough. You now have not only nation states trying to steal our stuff, but non-state, hostile intelligence services, well-funded — folks like WikiLeaks, out there trying to steal American secrets for the sole purpose of undermining the United States and democracy,” Pompeo said.

Besides Snowden, who leaked documents revealing extensive U.S. government surveillance, WikiLeaks recently released nearly 8,000 documents that it says reveal secrets about the CIA’s cyberespionage tools for breaking into computers. WikiLeaks previously published 250,000 State Department cables and embarrassed the U.S. military with hundreds of thousands of logs from Iraq and Afghanistan.

There are several other recent cases, including Chelsea Manning, the Army private formerly known as Bradley Manning. She was convicted in a 2013 court-martial of leaking more than 700,000 secret military and State Department documents to WikiLeaks while working as an intelligence analyst in Iraq. Manning said she leaked the documents to raise awareness about the war’s impact on innocent civilians.

Pompeo said the Trump administration is focused on stopping leaks of any kind from any agency and pursuing perpetrators. “I think we’ll have some successes both on the deterrence side — that is stopping them from happening — as well as on punishing those who we catch who have done it,” Pompeo said.

On other issues, Pompeo said:

• North Korea poses a “very real danger” to U.S. national security. “I hardly ever escape a day at the White House without the president asking me about North Korea and how it is that the United States is responding to that threat. It’s very much at the top of his mind.” He said the North Koreans are “ever-closer to having the capacity to hold America at risk with a nuclear weapon.”

• Pompeo said U.S. national security also is threatened by Iran, which he described as the world’s largest state sponsor of terror.

“Today, we find it with enormous influence, influence that far outstrips where it was six or seven years ago,” said Pompeo, a former Republican congressman from Kansas. “Whether it’s the influence they have over the government in Baghdad, whether it’s the increasing strength of Hezbollah and Lebanon, their work alongside the Houthis in Iran, the Iraqi Shias that are fighting along now the border in Syria — certainly the Shia forces that are engaged in Syria. Iran is everywhere throughout the Middle East.”