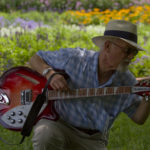 Jim Krause, Lawrence, tunes up his guitar before performing with his band Getty Township, Saturday, June 25, 2011, at the Killkenny concert in South Park.

A Lawrence musician is enjoying his “15 minutes of fame,” as Jim Krause puts it, after word spread that legendary singer-songwriter Bob Dylan quoted his lyrics during Dylan’s Nobel Prize lecture earlier this month.

Dylan, who delivered his lecture June 4 in Los Angeles after receiving the 2016 Nobel Prize for Literature last fall, used his speech to ruminate on whether song lyrics could be considered literature. In his remarks, Dylan quoted a verse from “You Ain’t Talkin’ To Me,” an old Charlie Poole song that Krause had reworked and recorded with Lawrence’s Alferd Packer Memorial String Band in 1985.

Dylan, unfortunately, credited Poole in his remarks, not Krause.

Krause, though, has a sense of humor about it.

“I’m just this obscure songwriter in an obscure state living in an obscure corner of the United States. Nobody knows who I am, and all of a sudden here he is quoting a lyric I wrote?” says Krause, 63, who works as an instructor at Lawrence’s Americana Music Academy when he’s not performing with Alferd Packer. “Stuff like that doesn’t happen, right? But there it is. You can’t make that up.”

The incident has since been blowing up on folk-music message boards, says Krause, who found out about his brush with fame after receiving an email from a stranger in Switzerland. Another music lover, in Italy, had done “a little detective work,” Krause recalled, with all clues leading back to a 2002 post from Krause on the folk-focused online forum Mudcat Café.

Krause himself posted his new lyrics to the old Charlie Poole song 15 years ago, he says:

Krause says he’s “flattered” by the shoutout, even if he wasn’t properly credited by Dylan. Since the Nobel lecture, he’s been receiving some attention on Mudcat Café, he says, and also found himself contacted by a Norwegian reporter inquiring about “You Ain’t Talkin’ To Me.”

Unless Dylan somehow got his hands on the Alferd Packer Memorial String Band’s 1985 album “Friends for Lunch,” on which the song appeared, Krause can only guess where he found the lyrics.

“He could hang out in the Mudcat Café under an alias,” Krause theorizes. “Who knows?”