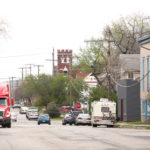 The City of Lawrence has budgeted more than million for 2018 to reconstruct several blocks of East Ninth Street.

After years of debate, a project to reconstruct an ailing stretch of East Ninth Street is moving forward.

The Lawrence City Commission voted unanimously Tuesday to proceed with a basic street design concept for the project, foregoing a previous concept that integrated public art and other artistic elements.

Commissioner Matthew Herbert said though he was in favor of advancing the project, he was disappointed in the outcome after so much time went into the original design.

“To me it’s pretty sad that after four years of having over 100 public meetings, having an actual concept design that received approval from every group it went before, that we’re just saying, ‘Well, never mind, let’s just get started,'” Herbert said.

The commission voted 4-0 — Commissioner Mike Amyx was absent — to approve a basic street design concept that does not integrate public art, but does preserve areas where art can be added. The approximately $2.2 million plan includes five blocks of street reconstruction, lighting and 6-foot-wide sidewalks on both sides of the street. The commission opted not to include bike lanes in the design to preserve green space.

Commissioner Lisa Larsen said she was in favor of moving the project forward with a basic street design.

“I’d like to see this thing built,” Larsen said. “I think this has been such a long, drawn-out process.”

The original, seven-block artistic plan for East Ninth Street would have integrated elements such as light and sound displays, natural rock seating, and stormwater management that used native grass and stone. Local artists were selected to contribute artwork to the project. The cost of the original design was estimated at about $3.8 million.

The artistic elements of that plan were to be funded in part by a $500,000 ArtPlace America grant awarded to the Lawrence Arts Center in 2014. Of that funding, $335,000 remains, and it is still available to fund art for the project.

While the basic street design approved Tuesday does not have any integrated art, it does preserve some areas where art could be installed. Porter Arneill, the city’s arts and culture director, told commissioners that there is a range of possibilities to add public art to the street project. Arneill said that process would be determined with input from the Lawrence Cultural Arts Commission and the community.

“We can craft a request for qualifications and guide the artists into that realm and say ‘these are the opportunities that you can do,'” Arneill said. “We could do sculpture — a more traditional approach — or we could do a range of other approaches.”

The basic street design does not allocate funds for integrated art, but recommends using the remainder of the ArtPlace grant to fund artistic elements of the project. The plan suggests working with the previously selected artists to adapt their projects, developing a streetscape design and expanding the city’s Downtown Sculpture Exhibition to include East Ninth Street.

The five blocks of East Ninth to be reconstructed — from New Hampshire Street to Pennsylvania Street — run between downtown and the Warehouse Arts District. Herbert said that he thinks a big part of the commission’s job is public infrastructure, but that he hopes the commission doesn’t lose sight of the unique opportunity to add art to that portion of East Ninth Street.

“I’m in favor of it, but I’m telling you right now it’s going to be a missed opportunity if we don’t do it right,” Herbert said.

City Engineer Dave Cronin told commissioners that now that the basic design concept is approved, the city will begin negotiating engineering services for the project’s design, which will then be brought back to the commission for further consideration.

Other potential additions to the project include $165,000 for underground electrical wiring and $60,000 for overhead intersection lighting. Currently, the East Ninth Street project is allocated $2.5 million in the city manager’s recommended budget for next year.

• Voted unanimously to defer the $58,000 purchase of a lot to preserve a large bur oak tree bordering Brook Creek Park. The agreement also includes the donation of an adjoining lot. Commissioners directed staff to review the proposal further due to concerns of environmental contamination.

• Voted 3-1 (Larsen opposing) to approve a plan for a new parking lot near Lawrence Memorial Hospital. The hospital will tear down about half a dozen single-family homes that it owns along Michigan Street to make way for an approximately 100-space parking lot.

• Voted unanimously to apply for a grant to help fund a pedestrian tunnel under the intersection of 19th and Iowa streets. The project would require approvals in future if the city wins the grant.

• Voted unanimously to expand a fast-track incentives program beyond the city-owned business parks. The tax breaks and other incentives offered by the Catalyst Program encourage companies to build speculative industrial buildings in areas zoned for general industrial use. The expansion was approved with the understanding that staff would come back with a provision that no business can migrate from its current location in the city without additional approval from the commission.

• Due to the time (the meeting concluded at about 11:30 p.m.) and the absence of Commissioner Amyx, the commission decided to postpone a discussion regarding the future of the city auditor position until July 11.