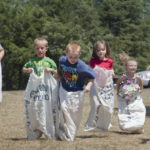 Children compete in a sack race at the 2014 Vinland Fair. Youngsters and adults are encouraged to entertain themselves in a variety of events at the fair, which returns this week for the 110th year at the southern Douglas County hamlet of Vinland.

The fair season continues in Douglas County this week with a decidedly different flavor as the Vinland Fair returns for its 110th year.

As he watched 4-H’ers remove the last of the livestock from the Open Air Pavilion on the Douglas County Fairgrounds Sunday morning, Mark Brown, a member of the Vinland Fair Board, with his wife, Sherri Brown, spoke of the difference between the just-concluded Douglas County fair and the Vinland event.?

“Vinland is a lot more laid back,” he said. “It’s noncommercial. Everything is volunteer.”

The fair starts at 2 p.m. Thursday and continues through Saturday at the fairgrounds just off County Road 460 at 1736 North 700 Road in the southern Douglas County hamlet of Vinland.

Brown said the fair has stayed true to its roots as a community harvest celebration started by the local grange in 1907. Attendees will not find the carnival or commercial booths that are common at county fairs, he said. The Vinland Fair is old-fashioned family fun with an emphasis placed on visitors helping provide their own entertainment. The opportunity to do so begins with the old-time and modern farm skills contest at 2 p.m. Thursday and continues through an ice cream-making contest at 7:30 p.m. Saturday.

Sherri Brown said the fair encourages children to participate in a wide variety of games and activities, as well as 4-H contests.

“There’s a lot of old-fashioned fun and games,” she said.

Children’s activities include a tug of war, bicycle and sack races on Friday and a pet parade and pedal tractor pull on Saturday.

The Thursday highlight is the 6 p.m. talent show, which also offers fairgoers the opportunity to provide the entertainment with music, dance, comedy and, in the past, circus acts. The 2017-2018 Baldwin High School band will make its debut at 7 p.m.

Another highlight of the fair is the food, Mike Brown said. The Vinland community gathers annually a few weeks before the fair to make the noodles that go into the chicken noodle dinners offered at the food booth. The Vinland Family and Community Education Club have now prepared and froze the chicken noodle dinners that will be available Friday and Saturday, he said. Pork and tofu burgers, as well as chili dogs, will be offered Thursday; pulled pork and brisket dinners join the menu offerings on Saturday.

Adding to the food booth delights are the pies offered all three days. Sherri Brown said she would start on Tuesday making those she will bring to the fair.

“All the pies are homemade,” she said. “My favorite is the chocolate chip pecan pie (Vinland resident) Julie Craig makes from an old family recipe. It’s a sugar rush in the best way possible.”

The Vinland Fair does make a concession to the modern era with its 7 p.m. Friday lawnmower pull and 11 a.m. Saturday tractor pull. Mark Brown points out the latter is an antique tractor pull, although some of the entries are modified.

For more information about the fair, visit vinlandfair.com.