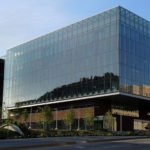 The University of Kansas Medical Center on Thursday morning announced the opening of its new $82 million Health Education Building in Kansas City, Kan.

The 170,000 square-foot facility will serve the KU schools of medicine, nursing and health professions, according to a news release from the KU Medical Center. Amenities include “state-of-the-art” simulation technology that will significantly expand the KU Medical Center’s Zamierowski Institute for Experiential Learning, funded with a lead gift from David and Marilyn Zamierowski of Overland Park.

“This building is the first in which medical, nursing and health professions faculty will work together to teach students from all three schools, practicing together during simulation training and giving all students real-world experience working as a team to improve patient outcomes,” KU Chancellor Doug Girod said in the news release.

The project was funded with $26 million from the state of Kansas, $21 million from the KU Medical Center and private donations raised through KU Endowment, including a $25 million lead gift from the Hall Family Foundation, according to the news release.

Helix, a Kansas City-based architecture firm, along with CO Architects of Los Angeles, served as the design team on the project. McCownGordon, which has offices in Manhattan and Kansas City, Mo., served as general contractor.

“As technology evolves and the science of teaching continues to change, we are prepared now with a flexible, high-tech facility that can change with it,” Robert D. Simari, interim executive vice chancellor of KU Medical Center and executive dean for the KU School of Medicine, said in a statement. “We look forward to educating doctors, nurses and health care professionals in a space that will meet our needs now and in the future.”

Students are expected to start using the new facility on Monday.