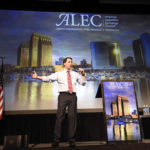 Topeka ? At least 20 Republican lawmakers from Kansas will be in Colorado this week to discuss state policy issues and to mingle with business interests, many of whom will be pushing legislation in Topeka and in other state capitals around the country.

The American Legislative Exchange Council, or ALEC, is holding its annual convention July 19-21 in Denver. Much of what the organization does is to produce model legislation that benefits the group’s corporate sponsors, then encourages state lawmakers to introduce those bills in their legislatures.

ALEC has staked out positions in a wide range of policy areas from agriculture to workforce development. In general, the group promotes low taxes, small government and minimal regulation of businesses, the economy and the environment.

According to the nonprofit Center for Media and Democracy, corporate sponsors of ALEC include Koch Industries, ExxonMobil, Peabody Energy and PhRMA.

The Kansas Legislature’s Administrative Services Division on Monday provided a list of the 20 lawmakers who had asked that agency to arrange for their registration at the event. Those lawmakers are entitled to have the state pay for their registration fees, which range from $525 to $775, depending on when they register and whether they are ALEC members.

Among those attending are Sens. Julia Lynn, of Olathe, and Gene Suellentrop, of Wichita, the chair and vice chair respectively of the Senate Commerce Committee; and Sen. Mike Petersen, R-Wichita, who chairs the Senate Transportation Committee.

Kansas House members attending this year’s convention include Rep. John Barker, of Abilene, who chairs the Federal and State Affairs Committee; Rep. Dan Hawkins, of Wichita, chair of the Health and Human Services Committee; Kyle Hoffman, of Coldwater, chair of the Agriculture Committee; and Rep. Randy Garber, of Sabetha, vice chair of the Energy, Utilities and Telecommunications Committee.

No lawmakers from Lawrence or Douglas County were listed as attending the convention.

Kansas Senate President Susan Wagle, R-Wichita, is currently listed on the group’s board of directors, but she is not on the list of legislators booked to attend the event. However, officials in Administrative Services said lawmakers can opt to book their own reservations and submit a claim for reimbursement later.

Barker and Sen. Ty Masterson, R-Andover, are listed as the current state chairs for Kansas.