Library survey says readers of all ages still prefer print to digital, among other findings 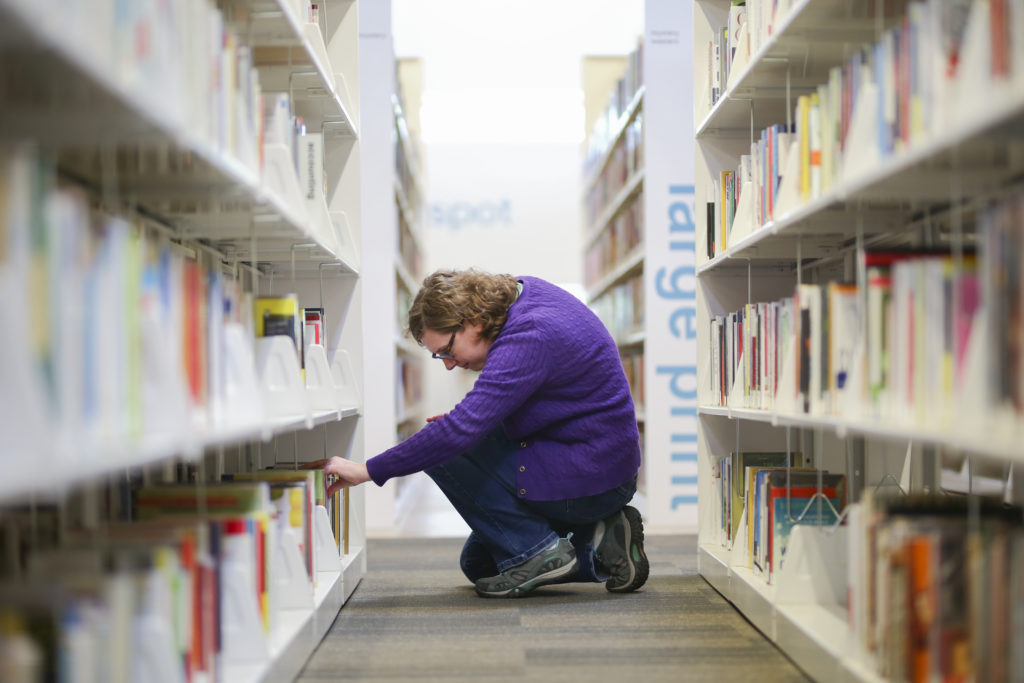 Melissa Fisher Isaacs, information services coordinator at the Lawrence Public Library, works to ensure that books are properly located within the shelves on Wednesday, July 12, 2017.

A survey recently released by the Lawrence Public Library is providing library leaders with new information on who is accessing materials and the nature of those materials, including the finding that many prefer print over digital.

“The whole point was to determine gaps in information, resources and services that are available in our community,” said Logan Isaman, an AmeriCorps VISTA community assessment coordinator at the Lawrence Public Library.

The AmeriCorps-sponsored survey, which launched officially in late spring 2016 and ended last December, generated more than 3,100 responses from library patrons. Around 2,000 paper copies of the survey were distributed, Isaman said, but most responses were digital.

Backing up national research on reading habits, the library’s survey found that all age groups overwhelmingly prefer print material to digital material such as eBooks. And, while common narratives about “digital natives” in their teens or early 20s might suggest otherwise, this group showed the least interest in digital content of all age groups surveyed by the library. Nearly 93 percent of survey respondents indicated a preference for print materials, while more than 30 percent indicated a preference for digital materials.

Most respondents — an overwhelming majority, at more than 74 percent — identified as female, a surprise to Isaman and her colleagues. Nearly 70 percent of survey respondents reported to have earned a bachelor’s degree or higher, while approximately 49 percent of the county’s general population have earned such degrees.

The respondent pool, while deviating from Douglas County census data, aligns with a 2016 report from the Pew Research Center, which found that women and those with higher education levels are both more likely to report having visited a library in the past year.

“I would almost argue that that is more telling of a library in a college town rather than just a general library,” Isaman said of the survey’s mostly college-educated, mostly female respondents.

Lawrence has long been documented as having a higher-than-average population of adults with college degrees. Likewise, the library’s youth services department earning a 2017 “Best of Lawrence” notation for family fun, Isaman suggests, might also indicate that the library is popular with mothers.

Also interesting, Isaman says, are the responses about what prevents guests from visiting the library more often. People living below the poverty line, for example, disproportionately cite library fines as an obstacle. More than 30 percent of respondents who meet Kansas poverty guidelines indicated that fines prevent them from visiting the library, while about 8 percent of people living above the poverty line gave the same answer.

Common assumptions about technology use across different generations, interestingly, didn’t exactly play out as expected in the library’s survey, Isaman said. The survey’s youngest and oldest age groups — those under 18 and those 75 or older — included higher percentages of respondents who indicated needing help with the library catalog system.

The preference for print materials — even amid the surge of eBooks in recent years — is not unique to Lawrence, Isaman said. A 2016 Pew Center study of American reading habits found that 65 percent of Americans had read a print book in the last year, compared with just 28 percent who had read an eBook and the 14 percent who had listened to an audiobook.

“I think that was a big finding for us,” Isaman said. “You see the most growth in digital and you see the most decline in print. However, people do overwhelmingly prefer print to digital … Our print collection is still getting tens of thousands of uses a month more than our digital collection is.”

Last month’s circulation numbers show digital checkouts accounted for 7 percent of all checkouts at the Lawrence Public Library, with checkouts of physical items amounting to 93 percent. It’s difficult to compare the two, however, because print materials still vastly outnumber digital materials in the library’s collection.

The survey findings, Isaman said, could affect budget decisions in the future, as library leaders weigh the steady increase in digital readership with print’s longtime dominance.

For now, she said, the library is working to implement changes based on the survey’s findings. Clearly labeling subject categories in the nonfiction stacks was a common suggestion, with around 19 percent of respondents requesting the change. Staffers began that work on Monday, Isaman said.

Another more or less immediate improvement, she said, is the establishment of a designated “quiet” spot along the library’s west wall. The area will now be advertised with a 6-foot sign overhead. 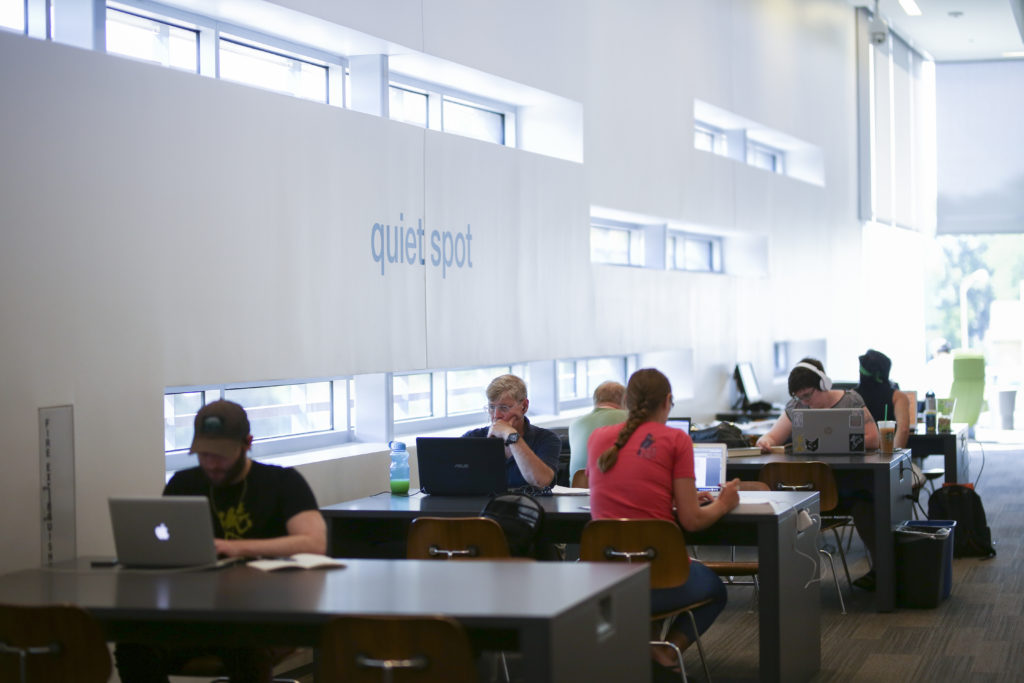 Visitors to the Lawrence Public Library work within the Quiet Spot area located along the west wall of the library, Wednesday, July 12, 2017.

“A big thing that people wrote in the survey without being prompted is that the library’s too loud and we need a designated quiet spot,” Isaman said. “Our youth services area is so popular and they have so much going on all the time, and the library is such an open space that the noise inevitably flows out all over the place.”

Isaman said the survey, though an imperfect assessment, will provide a solid foundation to more tailored, streamlined information-gathering projects in the future.

“It was a very large-scale, wide-scope kind of project in an attempt to reach as many areas as we could, but now that we have this base of information, I think it will be much more accessible for the library to get more specific and ask questions about more specific areas, more specific services in the library and that kind of thing,” Isaman said.

“We’re doing everything we can to meet the needs of our patrons, so I feel good about it,” she said.