What will it cost? What will you earn? Website offers prospectus on every degree program in Kansas 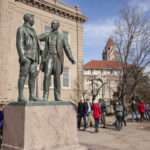 Topeka ? Prospective Kansas college students and their families now have access to comprehensive information about the cost of every undergraduate degree program offered by a public institution in the state and the kind of salaries students can expect to earn after graduation.

The Kansas Board of Regents this week launched an expansion of its website, www.ksdegreestats.org, to include information on degree programs at the state’s 26 two-year institutions.

Regents spokeswoman Breeze Richardson said the site also has more comprehensive wage and salary information because the system now receives data from both the Kansas and Missouri labor departments.

“It was somewhat limiting to only be saying what Kansas employees were doing, those who have graduated and are employed in Kansas,” she said. “Now it’s reflective of Kansas and Missouri, which for some universities and colleges, and some degree programs, the difference was really important.”

Perhaps not surprisingly, the data shows that many two-year associate’s degree programs lead to higher paying jobs than some four-year liberal arts degrees, and they cost considerably less.

For example, according to the website, someone graduating from Johnson County Community College with an associate’s degree in information technology can expect to earn a little over $35,000 upon entering the job market and nearly $62,000 five years after graduation.

The total cost of that degree, at $23,316, is less than one-third the cost of a four-year Bachelor of Arts degree in English from the University of Kansas, which, according to the website, would likely lead to a career with a starting salary of $20,2012, rising to $39,715 after five years.

The site also includes information about the percentage of each program’s graduates that are employed in the Kansas-Missouri region, the typical amount of debt they took out to pay for their education and what percentage of a graduate’s income will be needed to pay off that debt.

Regents officials, however, insist that the website is not meant to steer prospective students into any particular field of study or to dissuade them from others.

“The board does not encourage or discourage anyone from pursuing a particular degree,” Richardson said.

The website is the result of a bill that was debated in the Kansas Legislature in 2015 but that didn’t actually pass that year. The bill called on all of the state’s colleges and universities to publish a “prospectus” on all of their degree programs.

In its original form, the bill would have required schools to conduct surveys of their own graduates to collect highly detailed information about the kind of jobs they obtained after graduation, how long it took them to find a job and the kind of salaries they were earning.

Debate over that bill came at a time when universities in Kansas were under criticism by some conservative lawmakers who objected to recent tuition increases.

Kansas Policy Institute, a conservative advocacy organization, testified in favor of the bill, saying it would enable students and their families to make more informed decisions about higher education choices.

The Board of Regents was initially neutral about the bill, but it came out in opposition after the bill passed the Senate and was about to be taken up in a House committee.

At the time, Regents officials said they were already collecting much of the information that the authors of the bill wanted, and they asked for time to develop a system that would satisfy their concerns.

The result was ksdegreestats.org, which the Board of Regents launched in early 2016, initially only with information on four-year undergraduate degree programs.

“What we did was fight that legislation through the 2015 session, show up Day 1 of the 2016 session and said we understand your intentions and built this tool in response,” Richardson said. “Then the Legislature retrofitted its bill to match what we built and passed it into law.”