From hiding in a well to founding Round Corner Drug, New England family reconnects with Lawrence roots 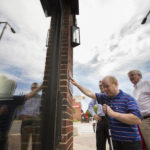 Brinton Brint Woodward III reaches up to touch a historical marker outside the former Round Corner Drug building, which is now RND Corner Grille with his father, Brinton Pete Woodward II, right, and grill manager Brenon Kincade, back left, on Monday, July 3, 2017 outside the building at 801 Massachusetts Street. Brint, who is blind, was brought by his father from Holderness, New Hampshire to visit the building built by his great grandfather, Brinton Woodward, in 1866.

On Monday, Pete Woodward made one of his frequent visits to Lawrence to see old friends and reconnect with family history. But this time there was a new addition to his itinerary: getting his son in touch with his family’s deep Lawrence history.

With him on the Lawrence visit was his blind son Brint Woodward, who literally got in touch with his roots by touching the bronze plaque on the front of the downtown RND Corner Grille. The plaque informs those passing by the building at 801 Massachusetts St., that B.W. Woodward built the Round Corner Drug Store in 1866 and that the owner was the first druggist in Kansas when he founded the business at the site in 1855.

The first Brinton Webb Woodward arrived in Lawrence in a covered wagon in 1855 as one of the New England settlers intent on making Kansas a free state. He survived William Quantrill’s 1863 raid on Lawrence by hiding in a well, Pete Woodward said.

Known as a cultivated man with a large library and art collection, his great-grandfather was an early member of the University of Kansas Board of Regents, Pete Woodward said. That association proved enduring. His grandfather, Chester Woodward, was a Topeka banker and president of the KU Alumni Association. His father, Brinton Webb Woodward Sr., went to KU before graduating from the University of Pennsylvania in business. He returned to Topeka and had a career in insurance.

The family’s most enduring legacy in Lawrence, though, may be the Round Corner Drug Store. The family owned and leased the building for decades, Pete Woodward said. He remembers visiting the drug store as a boy with his father and later dropping by to catch up as a KU student. The Round Corner remained a drug store until owner and pharmacist Tom Wilcox sold out in July 2009. When the pharmacy closed, it was noted as one of the oldest continuously operating pharmacies west of the Mississippi River.

Pete Woodward graduated in 1962 from KU, and his wife, Kathy, is a 1965 KU graduate. He was on the basketball team and captain of the tennis squad.

“I was on the basketball team for four years,” he said. “I wasn’t a starter and didn’t play a lot, but I lettered. The coach said I could have been MVP, because I kept so many people eligible by tutoring them.”

The coach during his years as a Jayhawk was Dick Harp. Future coach Ted Owens, with whom Pete Woodward keeps in touch, was an assistant. The stars during his years on the team were power forward Bill Bridges and center Wayne Hightower, he said. The 1960 team won the Big 8 Conference and lost to an Oscar Robinson-led Cincinnati team in the Elite Eight.

“I watched the game from the bench,” he said. “I had a great seat for it.”

A memorable event of the 1961 season was a brawl during the Missouri game at Columbia, Mo. Pete Woodward said the brawl stemmed from hard feelings about KU’s upset victory of an undefeated Tiger football team, which cost MU a chance for a national championship.

After graduating from KU, Pete Woodward earned his master’s in divinity in New York City at the General Theological Seminary of the Episcopal Church. He is an Episcopal priest and spent most of his career coaching, teaching, ministering and administering at Episcopal schools. He was headmaster of Holderness School in Holderness, N.H., from 1977 to 2001 and still lives in the town.

He remains connected to KU through the Endowment Association and the Chancellor’s Dinner of Homecoming Weekend, he said.

In addition to the visit to Lawrence, the Woodwards took in a bell concert Sunday at Topeka High School, which also had ties to his family.

“My grandfather was on the Topeka board of education,” he said. “He was an Anglophile and got the bells from England for the bell tower. It was neat to listen to the bell concert using those bells.”

The concert was a highlight of the Kansas visit for Brint Woodward, who said he had been a fan of bell towers and the music they produce since he climbed a tower with his father as a youngster.

“It was good, and I feel like I want to come back to Topeka to hear the Christmas concert,” he said. “I want to get a CD of the concert for my collection.”

As father and son sat down for an afternoon meal at the RND Corner Grille, Pete Woodward said he continued to be impressed with the vibrancy of downtown Lawrence.

“Having been raised in Topeka and having seen how it has changed, I am impressed,” he said. “I always come downtown when I visit Lawrence.”

He plans to bring his younger son, Peter, to his first KU basketball game next year, Pete Woodward said. Although his children didn’t attend KU, they are Jayhawks, he said.

“All the kids are KU fans,” he said. “They buy their own children KU stuff. It’s infectious.”