New building is slated for completion later this year 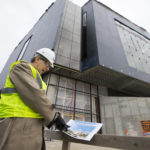 Robert Goldstein, KU distinguished professor of geology and associate dean for natural sciences and mathematics goes over some of the details around the exterior of the Earth, Energy and Environment Center on Monday, Jan. 9, 2017. The center is scheduled to open on Nov. 21, 2017.

The outside of the new building going up at 15th Street and Naismith Drive on the University of Kansas campus will yield clues about what field of study is happening inside.

Large boulders will be planted throughout the landscaping. Native Kansas limestone, quarried from Cowley County, will cover the building’s base. Terra cotta paneling will be tinted, textured and arranged in patterns inspired by the layers of rock found beneath the surface of the state.

The building is the Earth, Energy and Environment Center, and it will be the new home of KU’s geology department, in KU’s College of Liberal Arts and Sciences, as well as part of the chemical and petroleum engineering department, part of KU’s School of Engineering.

Construction on the $78.5 million, 141,000-square-foot project has passed the halfway point. Work began in August 2015 and is scheduled to be completed in November 2017, with the first classes to be held in spring 2018.

The Journal-World recently took a hardhat tour of the construction site.

It’s envisioned as an interdisciplinary research center to stimulate and support energy and environment research with opportunities for partnership with industry.

“Geology has changed,” said Robert Goldstein, KU distinguished professor of geology and associate dean for natural sciences and mathematics. He said that in addition to a science it’s also an important industry for the Kansas economy.

What was once a pretty simple field has evolved to require a lot of equipment, technology, labs and collaboration with other disciplines, he said. The department of geology’s work includes studying groundwater, natural resources, environmental cleanup, the impact of climate change, plus oil, gas and geothermal energy.

The EEEC will bring geology labs and classrooms currently spread across Lindley, Nichols and Moore halls and the Multidisciplinary Research Building under one roof, Goldstein said. Joining them will be related chemical and petroleum engineering spaces, namely those related to the oil and gas industry.

The EEEC’s design features lots of glass, atriums and collaboration spaces envisioned for students, faculty and industry professionals to come together.

“The idea is to invite the outside world into our campus,” Goldstein said. “Everything is visible.”

Private donations funded about half the center’s cost, with KU funding the other half, Goldstein said. The two buildings that make up the center are named for KU alumni with ties to the oil and gas industry whose families were major donors to the project.

The EEEC’s south building, Slawson Hall, is named for the late Don Slawson, of Wichita, a 1955 KU graduate who, at 24, founded an oil and gas exploration firm that became one of the most active oil drilling operations in the United States, according to KU Endowment. Slawson died in 2014, and his family donated $16 million for the EEEC.

Features of Slawson Hall will include, according to Goldstein:

• A virtual reality cave. The space will allow 3-D simulations of various scenarios, such as clouds interacting with the atmosphere or searching rock layers for oil and gas.

• Beren Petroleum Center, a 232-seat auditorium envisioned for lectures and use by industry professionals for small conferences.

• “Floating” meeting rooms, enclosed in glass and situated on bridges inside the atrium.

The smaller north building, Ritchie Hall, is named for 1954 KU graduates Scott and Carol Ritchie, of Wichita, who donated $10 million for the EEEC, according to KU Endowment. In addition to other ranching and business work, Scott Ritchie founded Ritchie Exploration Inc., an oil and gas exploration company, in 1963.

Features of Ritchie Hall will include:

• A 162-seat engaged learning, or “flipped,” auditorium. Seating is at large round tables with built-in computers for student collaboration during class.

The buildings’ unusual shapes and configuration are in response to that challenge. Both resemble elongated rectangles, but Slawson Hall has six sides and Ritchie Hall has five.

The project was designed by Gould Evans of Lawrence.

The EEEC is planted in the middle of what used to be parking lots and a popular pass-through for students walking from Jayhawk Boulevard to Allen Fieldhouse or other Central District spots.

It still will be, Goldstein said. He said existing outdoor staircases, plus the tunnel under Naismith Drive, will be torn out and replaced. The site will segue into Jayhawk Trail, a pedestrian path and greenbelt planned to traverse the adjacent Central District, where a new science building and other facilities are under construction as well.